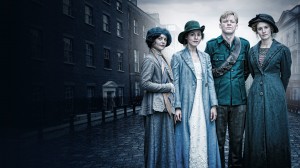 Rebellion is a historical drama that puts women at the centre of the action. The five-part mini series premiered earlier this year, coinciding with the 100th anniversary of the 1916 Easter Rising in Ireland, and is still available on Netflix for subscribers to binge-watch at their leisure.

The series begins in 1914, with three young Irish women performing a Gilbert and Sullivan number for a wealthy Dublin audience (true to the musical and the era that is being depicted, they are dressed as Japanese schoolgirls). ‘Three little maids from school are we,’ they sing merrily, as Britain and the world around them teeters on the brink of war. By the end of episode five, these women – and the world in which they live – are almost unrecognisable.

Based on real historical events but following mainly fictional characters, Rebellion focuses on individual experiences of the Easter Rising (also called the Easter Rebellion). In 1916, Ireland was still a colony of the British Empire, but some Irish people wanted to govern themselves. While war raged on the European continent, Irish nationalist groups took control of major buildings in Dublin and proclaimed an Irish Republic. Though they eventually surrendered and the British army carried out harsh punishments for those involved, the Easter Rising is seen as a significant moment in Irish history.

The series focuses on the Rising and its immediate aftermath, and its central characters each represent a different experience of the events. The three women who we meet at the beginning are Elizabeth Butler (Charlie Murphy), a banker’s daughter who defies her family and joins the Rising as a medic; Frances O’Flaherty (Ruth Bradley), a young woman determined to prove her worth to the republican cause; and May Lacey (Sarah Greene) who works as a secretary for the British administration and is having an affair with her superior.

The program also follows Elizabeth’s army officer fiancé Stephen Lyons (Paul Reid), and the Mahon family – Jimmy (Brian Gleeson), a member of the Irish Citizen Army and Elizabeth’s unconventional love interest, his brother Arthur (Barry Ward), home on leave from the front when the uprising begins, and Arthur’s wife Peggy (Lydia McGuinness), who cares for her children at home while the Rising goes on around her.

Throughout the series, all of these characters face conflicted loyalties, difficult choices, and devastating losses. The overarching theme of Rebellion works in multiple ways: of course, the title refers to the Easter Rising itself, but there are also the smaller, more personal rebellions, particularly of the lead female characters. Elizabeth rebels against her family and her expected path as a wife, refusing the life that has been laid out for her. Frances rejects the gender roles that persist among the members of the Rising, insisting that she be allowed to participate in armed conflict with the men. May, on the other hand, rebels by having her affair, only to find that the status quo might prevail in her personal life as well as the political sphere.

The series also makes clear the limited choices available to women of all classes in that era. Elizabeth is told by her mother that a good marriage is the only chance a woman has for security, but in order to pursue the cause she believes in, she has to leave not only her marriage, but her family, reputation, and entire life behind. In very different circumstances, Peggy Mahon must encourage her husband to return to the front so that her family can survive on the army separation allowance, even though it means she will be left to raise her children alone and might never see her husband again. Refreshingly, the show doesn’t make a judgment of these women and their choices; it simply shows us they were made in difficult circumstances.

Rebellion might not do everything it could or should, but it is certainly thought provoking. It shines a light on female experiences of political and social upheaval, and the ways in which they can be both shared with and entirely different from those of men. While perhaps not the most memorable series available on Netflix, it is worth a watch for anyone interested in an introduction to Irish history or, indeed, how women’s stories are told on screen.