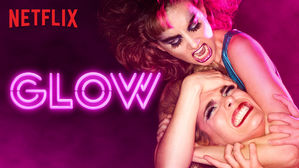 With winter well and truly settled in for another year, lazy weekend afternoons are best spent binge-watching some quality television (just add hot chocolate). The only problem is, in the age of streaming and endless choice, how do you choose a show worth your precious time?

Never fear: the Lip film crew has you covered. We’ve each spent our precious time thinking and writing about a show we’ve recently watched and loved—all for your reading pleasure, of course.

Finding myself at the end of Orange Is The New Black with nothing on my to-be-binged list, I put my faith in the new Netflix original, GLOW. An acronym for “Gorgeous Ladies of Wrestling”, this gloriously camp series is from (some of) the same writers and producers as OITNB and has the same dedication to female-led productions and diverse casting. It’s got all the things I want in a show (kick-ass women, sassy dialogue, short episodes) and a whole bunch of things I never thought I would want, but now love (e.g. an interest in women’s wrestling). Alison Brie (Community, Mad Men) and Betty Gilpin (American Gods, Nurse Jackie, and the author of the brilliant article ‘What It’s Like to Have Pea-Sized Confidence With Watermelon-Sized Boobs’) headline the show, taking on the roles of a determined would-be actress (Brie) and a weary new mother and would-be actress (Gilpin). The pair are former best friends, and they work out their issues in the ring. At its heart, this show is a look at the complicated nature of female friendship in an era that did its best to undermine it.

GLOW is now streaming on Netflix.

Do you like seething, deep political satires that make you question the meaning of the universe? Nope, me neither. But for some reason I LOVED The Young Pope (which I only just finished watching because I’m bad at binging things). If you have only seen the ads on TV, chances are you have no good concept of what The Young Pope is about. The show shifts gears all the time! One moment it is a searing arthouse drama, the next it’s religious satire, one moment situational comedy, the next a deathly serious thriller. These shifts may sound annoying on paper but it all works together and draws you into the weird, gaudy, twisty, tangly web that is life in Vatican City. The plot is simple to grasp (or so it seems): a young pope has just been chosen and he turns out to be nothing like the old-world cardinals expect. The supporting cast are divine, but really, you’ll stay for the pope. Pope Pius XIII, played with a delicious American twang by Jude Law, is charming, rude and venerable; basically, he is everything you’d want in a pope that makes you question the existence of God. Not many people I know have watched this show (yet) and I feel like this is because when hearing the premise, it seems like a bit of a dull “mh” show, but trust me The Young Pope is wacky as. Please watch so I can talk to more people about it!

The Young Pope is now streaming on SBS On Demand.

Master of None, Season 2:

The much-loved first season of Aziz Ansari’s comedy-drama, Master of None, was always going to be a hard act to follow. Sometimes those shows that we love because they’re so refreshingly different fail to deliver more surprises as they go on, becoming a little stale (I’m looking at you, midway seasons of Girls). Not so with the second season of this Netflix original series, which brings us the variety and character development needed to keep things interesting. When we meet Dev (Ansari) again, he is learning to make pasta in Italy. At the end of the first season, this plot twist seemed a bit out of place, but it really works as a way to progress Dev’s character and the show’s narrative. This season also plays with form in interesting ways. Episode 8  (Thanksgiving) tells the story of Dev’s friend Denise (Lena Waithe) coming out to her family in a series of scenes depicting Thanksgiving dinners from childhood to adulthood. Waithe co-wrote the episode with Ansari and Alan Yang, and the result is a wonderfully personal and cleverly executed piece of stand-alone television. Master of None also continues to challenge stereotypes and include new representations of millennial life: some of best scenes, for example, are those that feature Dev and his best friend Arnold (Eric Wareheim) talking about their respective love lives, strategising and giving each other support. This is one of the most endearing portrayals of a friendship between two straight men that I’ve ever seen on screen. Now that Ansari and the team have proven they are no one-hit wonder, I can’t wait for season 3.

Master of None Seasons 1 and 2 are now streaming on Netflix.