The third installment in the Toy Story series has been a long time coming!  It’s been eleven years since Toy Story 2 and in this film the toy’s beloved owner Andy has finally grown up, and is off to college.  Woody (Tom Hanks), Buzz Lightyear (Tim Allen) and Jessie (Joan Cusack) all return, along with a whole new toy-box of characters.  With Michael Arndt writing the script, of Little Miss Sunshine fame, you know this isn’t going to be just another kid’s film. 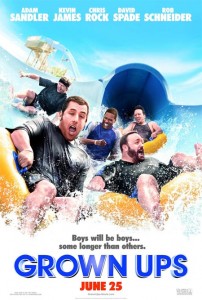 Grown Ups is a comedy ensemble piece, that depicts a holiday weekend between five “grown up” friends who reunite years later to honour the passing of their childhood basketball coach.  But their reunion isn’t just them bonding over their love of basketball – they have a veritable army of children along for the ride, as well as adult concerns hanging over their heads.  Starring Adam Sandler, Kevin James, Chris Rock David Spade and Ron Schneider – you know exactly what sort of film this is going be.

Get Him to The Greek (Dir. Nicholas Stoller) 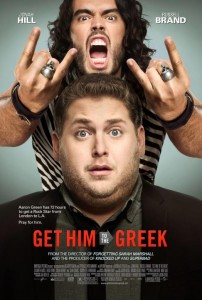 Technically a ‘Still New This Week,’ Get Him to The Greek stars Russell Brand as a falling superstar, reprising his role as Aldous Snow from the much better film, Forgetting Sarah Marshall.  Jonah Hill is a record company intern who must collect and relocate Aldous for his upcoming comeback gig.  Anarchy ensues.  Featuring a great deal of toilet humour, sex humour and not-particularly-funny humour, this film is for Russell Brand fans only.