film review: legend of the guardians 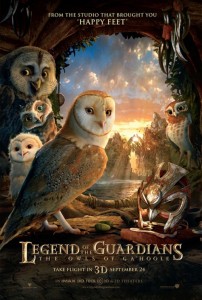 The story follows Soren (Jim Sturgess), a young barn owl who is imaginative, a dreamer, and hopelessly idealistic – the perfect protagonist for a coming-of-wing tale.  One night, he and his jealous brother Kludd (Ryan Kwanten) are kidnapped by a group of evil owls, intent on enslaving the lower owl-classes.  While Kludd is persuaded by their captors to join their cause, Soren escapes, intent on finding the fabled Guardians of Ga’Hoole – warrior owls of infinite wisdom, who will help bring down the awful (owl-ful) regime.

The all-star (or should that be owl-star?  No, probably not.  That doesn’t make sense) voice cast is competent throughout.  The actors involved are a showcase of Australian talent, plus some international cameos: Emily Barclay (Lou), Abbie Cornish (Somersault, Candy), Joel Edgerton (Animal Kingdom), Deborra-Lee Furness (Blessed), Ryan Kwanten (True Blood), Anthony LaPaglia (Looking for Alibrandi, Balibo), Hugo Weaving (V for Vendetta) and Barry Otto (South Solitary) all feature; plus Helen Mirren (The Queen) and Jim Sturgess (Across the Universe).  It’s worth listing the above actors, just to see the sheer amount of talent involved – and ultimately wasted.

Legend of the Guardians unfortunately never finds its feet – or wings.  One of the main problems with this film is that it just takes itself too seriously, and become less believable because of it.  Viewing the film, one might be more likely to accept that owls live in warlike clans and somehow wield metalwork tools to make themselves armour, if the film was more magical or irreverent.  Instead, there is a strange seriousness throughout the entirety of the film, which makes it more difficult to swallow the core premise.  The often solemn and stern tone affects the film in other ways: this is ostensibly a children’s film, but at times it feels far too dark and violent for younger audiences.  The self-importance of the film is enhanced with an incredible over-use of slow motion (then again, what else were we expecting from Zac Snyder, director of 300 and Watchmen?) and it all becomes a bit grim.

But then again, this is a film about owls that wear armour.  So I suppose it was always going to be a concept that ruffled a few feathers.