film review: life as we know it 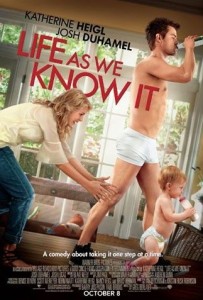 Life As We Know It isn’t actually good.  But it’s not as bad as one might expect it to be.

On paper, Life As We Know It is an incredibly creepy concept: a young couple dies, and in their will leaves their infant with the godparents – two late-twenties singles who hate each other – in an attempt to match make from beyond the grave.  The characters themselves should be as unappealing as the premise.  Katherine Heigl plays her usual stereotypical, uptight woman, Holly – while Josh Duhamel is the frat-boy man-child Messer.  A suitable name because, you know, he’s supposed to be slovenly, unkempt and messy – as all men are, of course.

And yet, Life As We Know It overcomes the bare bones of its story, to create something tolerable.  Heigl and Duhamel somehow make their characters feel believable.  Sure, there’s still an obligatory scene in which Holly finally lets down her hair with the aid of narcotics (this time with hash brownies – please compare to Katherine Heigl’s alcohol induced carefree nature in Knocked Up, 27 Dresses, The Ugly Truth, etc.).  And yes, Messer is occasionally represented as being as useless as a child.  Case in point is the poster, in which Josh Duhamel is wearing tighty-whities and drinking a beer – while the baby wears a nappy and drinks from a bottle of milk.  Because this irresponsible male is just a big baby, geddit?  But more often than not the characters feel like real people.

The script is also surprisingly sensitive, and rises above its off-putting premise.  It is still, however, an incredibly formulaic rom com.  Just because it’s founded on a truthfully tragic idea, doesn’t make it feel any more original.

Then again, I saw Life As We Know It with incredibly lowered expectations, thinking it would be worse than Killers – so maybe I was just pleasantly surprised. The ending and title of the film are both incredibly weak, but overall, it was a strangely touching tale. This is a Katherine Heigl Film Not As We Know It.  It’s almost watchable.

One thought on “film review: life as we know it”