film review: the kids are all right 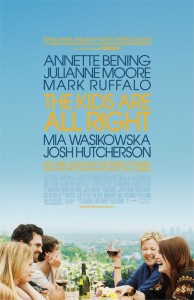 The Kids Are All Right is a warm-hearted, lightly handled film.  What could have easily become yet another ultimately depressing family drama or heavy-handed morality tale is instead a pleasant surprise: a pleasing blend of drama, comedy, and a cast of fine actors.

Nic (Annette Bening) and Jules (Julianne Moore) are a married lesbian couple, with two children conceived by artificial insemination.  They deal with the types of issues that every family deals with: Nic is too committed to her job, Jules doesn’t have a job, their daughter is leaving for college, and they worry that their son might be gay.   But when Joni (Mia Wasikowska) and Laser (Josh Hutcherson) decide that they would like to meet their birth father, life gets a lot more complicated.  Paul (Mark Ruffalo) is an eternally adolescent, laidback, lothario-type – and his presence shakes up the entire family.

This film features some damn fine performances, each actor adeptly handling the transitions between drama and comedy.  Bening is able to make her uptight, matriarch Nic more sympathetic, while the audience never loses affection for Moore’s flawed Jules.  Ruffalo’s Paul provides comic relief, while simultaneously becoming more than comic relief.  He is not merely a stoner with a predilection towards lesbians; he is a stoner with a predilection towards lesbians, who also wants to have a family of his own someday.  Josh Hutcherson is convincing in his portrayal of teenage awkwardness, which might have something to do with the fact that he is probably an awkward teen.  Wasikowska also delivers a well-crafted, subtle performance, proving that the stiltedness of Burton’s Alice in Wonderland was definitely not her fault.  Canberra can proudly reclaim this fey up-and-comer as their own.

For all that this subject matter sounds like it could be confronting, The Kids Are All Right tries to not comment on the potential controversies of the situation.  Some critics have already condemned the film for not more fully exploring the politics of same-sex marriages, or gay couples adopting children.  But by deliberately not engaging with these issues The Kids Are All Right makes the strongest political comment of all: it’s not a problem.  Rather than emphasizing how non-nuclear this particular family unit is, the film emphasizes how all family units are imperfect.  People are flawed, and family members fight, and sometimes people hurt one another; but the film also depicts the love, compassion and compliance it takes to make a family work.  In The Kids Are All Right, this is a family just like any other.

This film is more than just “all right.”  It’s wonderfully, horribly human.