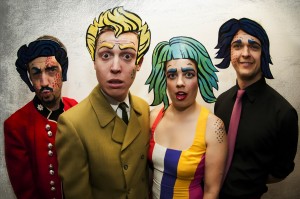 There was a time when Fun Machine was Canberra’s best kept secret. Not anymore, it seems, with the four-piece carting their sex-pop (plus glitter, lycra, facepaint) up and down the country for a series of shows promoting their new single, Naked Body. Naked Body sends a pretty clear message: celebrate yourself, because you’re beautiful.  It’s a message that squares with the life they’ve been about since the beginning. The band have just wrapped the hometown leg of the tour, and are preparing for Sydney and Melbourne, which they hope will be full of both fans and newcomers, ready to celebrate each others bodies, either naked or on the dancefloor. Lip spoke to Fun Machine about their upcoming album, their onstage garb and more!

What’s a day in the life of Fun Machine like these days?

Busy! But that’s part of the joy. Curiously, being a musician leaves only a small fraction of our time together actually playing music – we’re lucky if it’s 10%. Fortunately, the remaining time is for fun things like screen-printing shirts, painting our bodies, and working on dance-antics and chatting to you guys.

How did ‘Naked Body’ come about?

Chris wrote it on a bus home from his old public service job one day. It’s a defiant celebration and a light to shine against all the punishing ideas on your body that you can come across everywhere. Like a confident statement to just be comfortable in who we all are. It’s only one song from a mildly unpopular band, but better this one than more shit from Robin Thicke.

Summer 2013/14. It’s a broad album, linked less by genre and more by the base momentum of the band, which is just rejecting fear and expectations and trying to make the sounds we want and play with that ideas that we really feel. It’s definitely also a positive statement thrown out into the world and I think you’ll enjoy it.

How has your sound evolved since Desert Creatures?

More time songwriting and working in the studio inevitably means our stuff gets better and more complex. There are a million small decisions made on any recording and hopefully as a group we’re getting slightly better at each one. We already can’t wait to get back in and do another album and more and more and more.

The last couple of years have been really important in terms of the band growing and gaining international recognition. What’s been the most important thing that’s driven this growth?

Working hard and getting better at all the small things. It’s tricky to map exactly what influences growth in music, because the arts are subjective and so much of the work you do might only have an impact down the years. Thank God it’s such an enjoyable game, because it sure is nebulous.

Even though it’s 2013, there’s still a huge taboo over enjoying sex even in Australia. Ridiculous. So, for us, the chance to play around and show some leadership by being happy with who we all are and what we all do was too much fun to resist. Not in a published thesis, but in a simple celebratory thrust. But it’s all part of the same game.

You’ve had a really loyal following of locals since the beginning. Now that you’re playing all over the country, what’s your message for them?

Come and enjoy yourself! Like most people in Canberra, we’re from the rest of the country. I’m from Sydney, Chris is from Melbourne, Ramsay’s from Newcastle and Nick’s from Brisbane. So we’re all excited to get the dancefloors warm at our spiritual homelands and share something that might be a bit new to people.

Has their been a single, defining moment when you realised this is the life for you?

I graduated from a law degree last year and enrolled to do my practicing qualification while we were recording the album. It just seemed ridiculous to on the one hand be spending all day doing something I love, to then mapping out a ‘just in case’ life, because I had already gone so far down that path.

I dropped out, am doing a masters in music and obviously playing, writing and recording all the time and it just fits. Investing all your time in a Plan B means you use the Plan B.

You’re known for your loud and tight dress sense on stage. Does any of that make its way into your offstage wardrobe?

Some of it starts its life as offstage wardrobe before graduating to performance! Not too much skin in the streets though, the police enforce those sorts of things.

The warpaint and glitter are also well known. Would you be able to achieve the same magic on stage without it?

Absolutely. Those things are only a particular manifestation of the same idea. We’re still cycling through a lot of different dress ideas, most appropriate to the show we’re playing. I don’t mean appropriate, like, pants suit, but a one-piece at the pool, pop-art at the Lichtenstein launch, etc. The idea painting up initially is to make a positive and different statement, with most other bands not ‘dressing up’ but, of course, conscious and deliberate in what they’re wearing. I’d love to play all shows naked, but that would send a specific, non-neutral statement. The magic is the energy, not its aesthetic.

What’s next for Fun Machine?