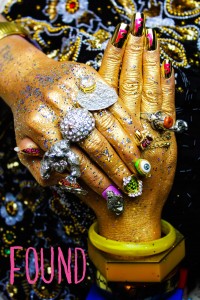 I sat down with Found Festival director and Lip writer, Ad Hoc, to discuss this year’s ambitious festival held at the Testing Grounds in Melbourne from 2pm on the 21st of November to the wee hours of 5am on the 22nd of November.

Could you first briefly tell us about your career as an artist so far?

I’ve had a really varied career. Artist is a real catch-all term but I’ve done a lot of production, design, curating, tattoo, writing. I’ve sold my ass and all my memories on Ebay…In the past I would have been called a conceptual artist I suppose, but that term isn’t used so much now. Now you’re called an ‘entrepreneur,’ haha. I’ve made a lot of massive neon text installations for festivals and intimate, interactive crowd works. I worked at Burning Man on the construction crew for four years, and even joined a travelling carnival that toured the US for a while…all of these things have culminated in me creating Found.

How did you get involved with Found Festival?

I started working on Found in 2012, after winning the Spiritous Award to create site-specific works at the Abbotsford Convent. I was shown around the grounds and learnt about the Convent’s past as a Magdalene Laundry. I was really horrified about the history, and the rooms that were where the laundry was done were dilapidated and really haunting. It grew from that, but also being really tired of knowing so many incredible female artists that felt really isolated from the industry and how they were perceived generally. I have always been very political but Found is the first time I’ve overtly mixed my personal value system with my art practise.

What is your role with the festival?

I’m the Director of Found, and it’s a project I see as an extension of the rest of my practise. I guess I’m what you could call the concept designer of Found, and I manage the branding and PR, and work closely with a lot of artists to produce very specific works. I’m the overseer, but there is a fantastic crew of really hyper-intelligent and hard working women, who assist in every single aspect of Found. It is very much a group project with a focus on understanding how artists can work effectively together.

What is Found Festival all about?

The most important element of Found is being really absurdist and celebratory while presenting really serious work. I’m into very black comedy and groups like The Suicide Club, and I think that shines through. Found is for the people who feel like they’ve been pushed to the fringes of culture, which is how I felt growing up. It also addresses the lack of female representation in mainstream festival programs, but we deliberately don’t labour over this fact in our marketing. I want Found to prove that audiences will flock to line-ups populated by women if we stop making a big deal out of it and just do it. The first Found proved this to be true, and I am certain the 2015 event will be just as successful.

What can the audience expect to see, experience, and feel at Found?

Anything and everything. An arm wrestling competition, performance art vaginoplasty, giant projections of Betty Grumble, a Bette Midler Santa, velcro-strippers, a handmade Church, comedic sex worker tales, half woman half beast creatures, grimy Karaoke battles til 5am at the notorious Charltons, readings from by some really fantastic speakers…there is really so much going on its impossible to define. Its 17 hours of pure power!

How is Found Festival a “positive protest”?

By collecting women who are not generally represented in mainstream culture to present their work in an immersive event of celebration and revelry. My logic is that people follow those who look like they’re having the best time. Schweppes has this marketing seriously down pat. The same formula can be applied to anything. I want everyone to experience what a huge amount of fun it is when we all agree that the clichés and stereotypes we pigeonhole women and all non-conformists in our society into are fucking boring. Lets create the future where all this bullshit it behind us and we can just enjoy each other’s company.

What challenges have you faced in the creation of Found?

Doing something of this magnitude as a volunteer is in many ways virtually impossible. Its so easy to burnout, and pretty much everyone does at some point. There are days where it feels so insurmountable. I have to seriously hustle with so little capital at my disposal, and this can make it really difficult to have any sort of life. All I do is work constantly. I can only do it because I see the direct benefit it has on my community and the people around me and that brings me so much pleasure.

Because we live in such a success-obsessed culture, I know a lot of women running similarly massive socio-political festivals and events that rarely speak out publicly about how much pressure it is and how much strain it can put on your personal life and wellbeing.

I also find it really difficult to ask other arts workers to contribute their time for free, as its a really toxic situation we have in Australia of artists being completely exploited. I work around 70+ hours every week on Found and that’s the same hours a CEO might work and earn seven figure sums, while I’m expected to ‘do it for the love of it.’ The belief so many seem to have that we don’t need to pay artists is the bane of my life.

How does the festival interrogate public space and why?

Found 15 is exploring new models of participation. I became very interested in the ideological space and physical shape of Town Squares. How they function as a site of both interrogation and celebration is fascinating. They’re a level playing field in some way. The Found space at Testing Grounds is set up like a pavilion with the audience in the middle and installations and stages running around the outside.

There is no line-up available to the audience telling them what is happening where; they need to discover things for themselves.

Found is overtly occupied with encouraging the audience to explore their different personas between the public and the private at the Festival.

Who can we expect to see on stage?

There are SO many acts – over 150+ women are involved in Found this year. I had a realization a few weeks ago that we’d accidentally put together the largest festival line-up of women across the Arts in Australia and I was a bit shocked, as it hadn’t been the intention. Everyone just kept recommending more and more amazing people so it grew. I would feel terrible picking individuals out to showcase because everyone we’ve chosen is really fantastic. Head to the line-up page and have a read through the massive list of Power Babes: www.foundinitiative.com/ff15

Even if you think you’ll hate Found you should come- we’re up to the challenge- and what are you afraid of anyway? We won’t bite unless you ask us to. Wear something that shocks you. Don’t be afraid to be ridiculous. Or, still be afraid, but don’t give a shit if someone else isn’t.

Found is half price for students and concession cardholders, and free for Seniors, Disability Pension and Companion Card holders. We’ve built ramps at both venues so that Found is completely wheelchair accessible. Our commitment to diversity is not just a marketing scam. We’re Power Babes United.

All the info on this year’s line-up can be found at: www.foundinitiative.com/ff15
To buy tickets click here: http://www.eventbrite.com.au/e/found-festival-tickets-18990532193

2 thoughts on “interview with ad hoc: director of found festival”