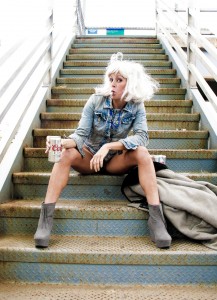 The 2014 Melbourne International Comedy Festival kicks off this week and here at Lip we are excited to introduce our Ladies of Comedy series of Q&As, featuring some of the talented female comedians who will be performing at the festival.

Hailing from the USA, Adrienne Truscott brings her show ‘Asking for it: A one-lady rape about comedy’ to the Melbourne International Comedy Festival. Performed naked from the waist down, the show promises to do and undo “the rules and rhetoric about rape, comedy and the awkward laughs in between”. One half of the infamous Wau Wau Sisters, Adrienne Truscott possesses the rare ability to tackle controversial issues with irreverence, intelligence and cutting wit.

Comedian or Comedienne?
Comedian please, and who you callin’ a lady?

How did you get into comedy?
I slipped on a banana peel and fell? No, I reckon it was when I started performing, which was initially as a dancer. Just about any interaction with another human seemed like an opportunity for comedy, whether it was dance, circus, with another person onstage or with the audience. I made shows as a kid in the living room which were all comedy, or at least attempts. I love that quote by Steve Martin, ‘I have heard it said that a complicated childhood can lead to a life in the arts. I tell you this [a weird and tough story about his childhood] to let you know I am qualified to be a comedian.’  That rings true for this lady.

What do you like about stand-up comedy compared to other styles?
I like that there is less theatrical convention and less artifice, although they’re not absent. There’s structure and freedom in equal amounts, but it feels a bit more immediate, more dangerous and the night can change at any moment.

Your decision to perform your show naked from the waist down is certainly a bold one. How do you think it contributes to the points you make in your show?
The show’s called Asking For It.  I guess it just makes the questioning of that ‘logic’ more explicit – I’m a lady, out at night, drinking a bunch of cocktails, acting open and a bit flirty and dirty, and I’m not wearing pants. So I guess what it says, is that the invitation it’s accused of being…

Here at Lip we think the whole ‘asking for it’ excuse is pretty illogical too. How do you think the medium of comedy can help confer this message to those who might actually believe that there is some merit to victim blaming?
Because I think good comedy/satire can slice and dice an idea, assumption, etc. better than most other forms, and in the most accessible way. It’s the most exciting and immediate way to state the unmentionable. Or articulate that layer of understanding where humour swoops in to take up that space just between incredulity and insanity. That sounds a bit dramatic, but that’s the only way I can think to talk about how humour is really useful even when it’s commenting on something that’s not ‘funny’.

Do you identify as a feminist and if so, what’s your feminist philosophy?
I do. That feminism is largely synonymous with a belief in equality, but speaks specifically to inequalities between gender and regarding sexuality – inequalities that express themselves socially, economically, politically, etc. And my feelings about these inequalities are backed up by facts and experience, not simply anxiety and frustration. But, as overwhelming as those things can be at times, you walk out into the world with a sense of humour and absurdity intact, and assuming anything brilliant is possible.

What advice can you give to aspiring female comedians?
I don’t feel remotely qualified to answer this question! I can say this: when I get an idea that terrifies me a bit because its possibilities for failure seem endless, but the idea won’t leave me alone, I feel like that’s a good place to start.

Anything else you’d like to share with Lip’s readers?
Oh gosh, just that I think it’s a great time to open your mouth and/or do your thing, and that the world is all ears right now.

Adrienne Truscott’s Asking for It opens on March 27 and will be showing at the Portland Hotel until April 20.

Want more? A review of Adrienne’s show will be published on Lip early next week – watch this space!