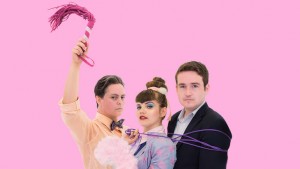 Showing at The Butterfly Club as part of this year’s Melbourne International Comedy Festival, That Sexy Show shamelessly tackles the topic of sex in a game show style with not a boundary in sight! Hosted by self-proclaimed ‘sex geek’, Sarah Jane along with team captains Geraldine Hickey and Adam Knox, this strictly 18+ show features a rotating panel of comedians and ‘sexperts’ and is guaranteed to be both hilarious and enlightening. Lip caught up with the lovely Sarah Jane to find out more:

What was the inspiration behind the show?

I used to be a team captain on another show, We Should Know Better, in which we would do different themes every month. One month we did a “Queer” themed show – queer guests, queer games, and we set up a Queer Kissing Booth – and it was incredibly successful. It made me realise that there was an audience for a sex-positive, queer/kink-friendly show that looked at the fantastically surprisingly world of sex.

Another thing that motivated me – other than my endless fascination with sex – was that during the comedy festival last year a lot of my queer, kinky friends were afraid of going to comedy shows for fear of being the victim of a “lol hate-crime”. I wanted to make a space in which people could feel free to be themselves regardless of their orientation, gender or proclivities, and make that space fun!

Can you give us a bit of a sneak peek as to what to expect on Thursday night?

This Thursday we’ve got one of the most amazing line-ups we’ve had! We’ll be graced by the presence of Fiona Patten (leader of the Australian Sex Party – that’s right, a politician!), Anna Brownfield (feminist pornographer of Poison Apple Productions), Rose Callaghan (comedian and babe) and Bart Freebairn (doubly happy comedian).

We’ll be playing pornography (of the ridiculous variety), dissecting Cosmo sex tips (sometimes with physical demos), and showing you the strangest sex toys the beloved internet has to offer.

Where do all these sexy but absurd questions and facts come from?

It helps that I’m obsessed with sex, so a lot of it is just stuff that I come across in my day to day life. Beyond that, it’s mostly from our fantastic writing team just trawling the internet for content. I’m actually surprised that we haven’t run out of fodder yet but it seems there is no end to the ridiculous and sexy things we discover.

What has been one of your favourite experiences from doing the show?

What’s the dynamic between you, Geraldine and Adam and how do each of you make a unique contribution to the show?

I’m not a comedian – at least, not in the sense that I’ve ever done stand-up comedy, I’m just the resident sex-obsessed polyamorous queer so Adam and Geraldine are there to bring the funny. Adam also serves as the “everyman” – Geraldine is openly gay and Adam is as straight as they come. We want the show to be accessible to people who aren’t in the sex-positive community, and so having someone vanilla there to ask what terms mean (like “vanilla”) is really helpful!

On a more serious level, why do you think it is important to address the topic of sex and how does the use of game-show style comedy contribute to this discussion?

I actually have a deeply personal approach to the show and to how we talk about sex. The shame and stigma around sex has lead me (and many others) to some pretty tragic situations which could have been avoided if I felt I had the opportunity to talk about it openly. So for me the show is political activism disguised as a comedy show. It’s an opportunity to create a radically safe space free from the cloak of sexual shame. But why comedy? Well humour affords us a powerful opportunity for connection, education and change, firstly because it’s fun, so people want to come, and secondly because it removes your guards, and makes people open to possibility.

That Sexy Show wraps up on Thursday April 17 and it’s sure to be popular, so buy your ticket now or check out Facebook for our double-pass give away if you’re feeling lucky!