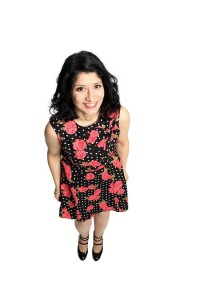 Born in Iran and raised in England, Shappi Khorsandi has delighted audiences world-wide with her unique, tongue-in-cheek sense of humour that covers a range of topics from personal dating experiences, to racism and the exile of her family from Iran shortly after the 1979 Islamic Revolution. Khorsandi has performed previously at the Melbourne International Comedy Festival, once in 2007 and again in 2012- both times to a great response. This year’s show will focus on Khorsandi’s personal experiences, which, given her unconventional upbringing and endless comic charm, means we are all in for a treat!

How did you get into comedy?

By following the yellow brick road

As a comic, how do you think your particular life-experiences have influenced your work?

I’ve read that you don’t like having a ‘theme’ for your shows- why is this?

It’s more that I don’t want a themed title… I tour and want to feel able to chop and change what I do without it having to fit in with the title. It’s not The Sound of Music.

You’ve already published an autobiography, ‘A Beginner’s Guide To Acting English’ (2009), do you have any plans for future books?

Not until the kids are older. They are way more fun at the moment than locking myself away to write.

I’m a feminist in the same way I am an atheist…it was the way I was raised and I didn’t know there was a word for it until other people started calling me those words.

This is a question for the audience to answer.

Face the front, don’t look at your shoes (NB this possibly applies to male comics too.)

Shappi Khorsandi is performing at the Melbourne Town Hall until 13 April.

One thought on “ladies of comedy: shappi Khorsandi”