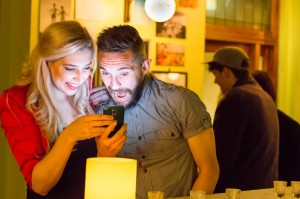 Hailing from Wollongong, NSW is playwright Laura Jackson who has recently announced that her newest work The Culture will be showing at the Sydney Fringe Festival from the 25th-27th September at Erskineville Town Hall. I caught up with Laura and chatted with her about her career in theatre so far and about this latest work which seeks to explore the idea of fitting in and not fitting in to today’s culture.

Could you first tell me about your journey in theatre and performance so far?

Ever since I was young I’ve loved to sing. I found a passion & aptitude for acting a little later, and I spent three wonderful years immersed in the studies of acting & performance at the University of Wollongong. I also always loved to write, even as a child, so it felt a natural progression after my studies in acting to develop my skills in as a writer through a Masters of Creative Writing. This is really where my journey as an independent playwright and performer began. With the help of two wonderful Masters supervisors, Janys Hayes & Catherine Fargher, I created and performed my first play “Handle It” which has since had 7 successful seasons, and about to have it’s 8th at The Sydney Fringe, and has been an amazing vehicle for me to develop myself as a writer, performer and … well, a person who feels she has something to say!

Have you always known you wanted to work in theatre?

I’ve always known I could never sit behind a desk. And I’ve always known that I find my greatest joy in creativity and expression. So that conviction has led me down certain paths. I certainly love to work in theatre, I love to write and perform, and believe if I can make not just a career, but also a difference out of my plays, well, that might just be my true calling. However, I also work as a singing teacher and I find immense joy and satisfaction in that work as well. I still consider that line of work very much within the performing arts field – which is broad, challenging, exciting and always changing.

What is the inspiration behind The Culture?

It had been such an astonishing and incredible ride with Handle It up until that point, and I felt like it was time to follow up with something important.  The inspiration for the play is in there in the title The Culture. What is it about the culture that we live in that subjects certain groups to mistreatment at the hands of other groups – why is that people are discriminated against based on gender, sexuality, race, size, looks? I felt that as a woman I have a certain set of common experiences with other women, and in examining those I found some similarities with the kinds of negative experiences that gay men have to put up with – at the hands of some similar forces & groups. In a one-hour play, it’s impossible to take on all the issues with the “culture” that surrounds us, so I zeroed in on street harassment, homophobia & domestic violence.

What is The Culture about and what can we expect from the show?

First and foremost The Culture is about a friendship. Katie and Will have been friends since childhood, and despite the fact that both of them have had to put up with their fair share of suffering because Katie is a young woman, and Will is a young gay man, the story is told through this warm, playful friendship and that gives the audience a chance to have a lot of fun with them. While thematically the play tackles some tough issues, at their core, these two characters are really concerned with trying to find love – in a toxic modern culture. Their relationship is wonderful, and fulfilling, they are searching for love beyond that, and that process, may be enough to break them apart. It’s been wonderful to explore this role, acting across from my good friend Michael Blakeley, and under the direction of Janys Hayes.

What do you hope audiences walk away with after seeing the show?

One of the most wonderful things that happens every time I perform Handle It are the conversations that happen that happen in the foyer afterwards, people ask me “what should I do?”, or say “I spoke to my son/daughter/sister/father/teacher/friend about this after we watched your play”. I knew I wanted The Culture to have the same power to spark conversations in an audience. It’s never been my intention with either play to ‘hit the audience over the head’ with a moral message. I’d rather present them with a serious of ideas for consider and let them make up their own mind. If audiences walk away from The Culture having had an engaging, thought provoking and entertaining evening, which provokes some conversations on the topics raised, then I feel like I’ve done my job. I guess I’d also like audiences to consider their own and other people’s (often unconscious) participation and contribution to those parts of “the culture” around us that humiliate or oppress others.

What are your plans for the future in terms of your career in theatre/touring the show etc?

I’d love to take it far and wide! Handle It is growing and growing and I’d love to take The Culture along the same exciting road! We’ll see what opportunities arise, but I can’t wait! In terms of my career generally, I’d love to keep writing and performing plays and I hope that by doing that, I’m making a little impact on my corner of the world.

Could you provide all details about The Culture’s Fringe season?

Absolutely! The Culture premieres in Wollongong first, 11-13th Sept at Phoenix Theatre, Coniston, book at: http://www.trybooking.com/IEFW – before heading up to The Sydney Fringe! Sydney Fringe season is at Erskineville Town Hall which will be a hub of activity throughout the fringe – show dates are 25 – 27th Sept book at: bit.ly/TheCultureSyd. I’ll also be performing Handle It at the Sydney Fringe, Erskineville Town Hall – 23rd & 24th of Sept  book at: bit.ly/HandleItSyd

One thought on “laura jackson: interview”