lip lit: aa gill is away 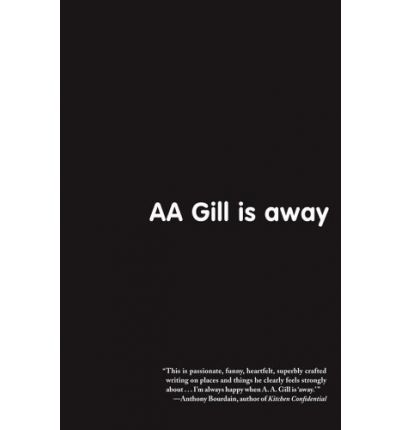 Oh, AA Gill. My feelings about him are mixed. On the one hand, he is mordantly witty, and utterly bereft of filter or bullshit – my kind of writer. On the other hand, he can be brutal and acidic and so proud and self-satisfied that it’s incredibly off-putting. AA Gill is away is his first collection of travel writing. It is unlike any other work within the genre. He combines the best elements of Patrick Leigh-Fermor and Hunter S Thompson, and consequently he joins them on my list of caustic, charismatic chroniclers of unfamiliar worlds.

Gill is self-educated, severely dyslexic, plagued by alcoholism, an eternal outsider but immediate and intimate in any situation – an irresistible mishmash of hard-edged fallibility. He claims not to write anything during his actual travels, but rather to return home to the UK and ruminate on his experience for some weeks before he begins each essay. This seems improbable, but certainly his writing has a uniquely gratifying stylistic looseness and spontaneity.

Gill is no wide-eyed worshipper of unfamiliar cultures; he does not fall helplessly in love with a place or its locals. He doesn’t fawn over foreign places or treat them like snow globes to be shaken up then oohed and ahhed at. Gill willfully subverts the conventions of travel literature. He tours some of the world’s most renowned places, and writes them off as not worth the trouble. He visits reviled or ignored places, and describes them with a clear-sighted tenderness. We are far from the realm of cosy stories in which a heartbroken woman discovers a new lust for life through renovating a villa in Tuscany.

In the book’s first essay, “The End of the Road”, Gill observes an ordinary day in a Sudanese aid camp. In doing so, he immediately signals that he is not providing a vicarious cosy magic carpet tour of the world. Sudan is a place indelibly shaped and defined by war and famine, and Gill rages against the developed world’s lack of intervention. He describes the resigned resilience of the Sudanese people queuing to receive meagre food supplies. Watching starving teenage girls awaiting their allotted rations, he marvels: “They flirt. Nobody prepares you for flirting in a famine. While there is life, there is still living”. Insights such as this come regularly in his writing, like unexpected sucker-punches. Gill is keenly aware that “life-shortening, unremitting poverty and hardship so often have the sharp corollary of a fiercely magnificent aesthetic. Just as long as you’re not expected to join in”. His fierce sense of injustice is both rousing and guilt-inducing.

At times, Gill tears apart a city, country or culture with evident relish. Many are places I have visited and loved, and his criticisms of Berlin, California and Kyoto feel like personal affronts. His dismissals come in the form of pithy bon mots, and often are so whip smart they are difficult to refute. Underwhelmed by the Japanese system of belief, he quips, ‘If religions were cars, Shinto would be a wheelbarrow’. He writes some truly offensive and indefensible things about Hiroshima, the legacy of the war, and Japanese culpability – but he’s so disconcertingly articulate, his dismissals so rapid-fire, that they are nonetheless convincing. By the time outrage has formed he’s moved on to his next target.

From one piece to the next he redeems himself by revealing the world’s forgotten places. He visits Kara-Kalpakstan in far west of Uzbekistan, a semi-autonomous republic and former fishing economy. Abandoned by Russia and the Stans after the collapse of the USSR, the Kara-Kalpak people have literally leeched dry the essential source of their livelihood, the Aral Sea. Gill’s description of rapid ecological devastation resulting in an apocalyptic salted earth is frightening, as is the ignorance which caused it. He closes with the devastating image of the terrible day in 1986 when “all the fishing boats went out, cast their nets in a circle, and when they pulled them in, there was nothing”. This is socially responsible writing which educates via shock and awe. How many people would otherwise know about this dusty, abject place, where those children who manage to survive the 30 percent infant mortality rate are likely to be born with TB? Would Western readers otherwise have any awareness of ‘the worst place in the world’?

Gill is endlessly mercurial. As easily as his descriptions of place may provoke existential despair, they can also be utterly hilarious. Not merely wry, cynical, or ironic (although his writing is all of these, in spades), but genuinely, exclaim-aloud-while-reading funny. Viewing the prize stock at the Royal Agricultural Show, he is struck by the process by which ‘each breed was carefully forged from forced copulations over hundreds of generations. In these rings it is possible to see the countryside as one vast Nazi brothel, producing specialist über-races’. It’s the surprising incongruity of Gill’s analogies which makes them so sharp.

His visit to Bethlehem on New Year’s Eve, 1999 is a bewildered indictment of the contradictions and hypocrisies of (dis)organised religion. Priests and monks and religious leaders from all faiths and sects shuffle for space at the birthplace of Christ, crammed cheek by jowl and each claiming their tradition’s absolute right to the holy space, determinedly ignoring other clergy and their congregants. “It’s here,” Gill writes, ‘that I realise what these churches, and indeed Israel, remind me of – it’s the way-out-there, end-of-the-universe, lawless, freebooters’ planet from Star Wars, a votive frontier town mining spiritual gold from dross, a federation of disparate and weird aliens in funny hats and exotic robes, with obscure and ancient ceremonies, tortuous languages and bizarre habits’.

AA Gill is humorous, cruel, and insightful. He is also poetic. Great swathes of his writing – particularly those sections which deal with a particular experience rather than a broader sense of place – read as passages of prose poetry. His surreal description of Milan Fashion Week is a master class in show-don’t-tell:

The show eddies and shimmers around these little islands of ruminating retired burghers. A crocodile of tiny matte-black Japanese girls files past, questing labels like polite, smiley soldier ants. German fashion editors in short skirts with bulldozer knees and steel-tipped blitzkrieg pumps hurry to their next show. Impossibly tasteful New York editors carrying vast sea-snake Filo-faxes try to look European, their hair as glossy as mink, cut in that dramatically understated I’ve-no-time-for-all-this, working-girl way that needs only two visits to the hairdresser a week. Navigating down the middle of the walk is a woman who looks like an indecisive Ivana Trump who, because she was unable to make up her mind, decided to wear everything in the steamer trunk. She’s sweating and glowing because she’s pushing her daughter in a wheelchair. The girl is about sixteen, pretty and embarrassed… Her mother’s having difficulty getting the chair into Prada. The door is heavy and there are steps. The assistants with Novocaine expressions watch without helping.

All this description – and yet no plot, just endless, selective scene-setting which is as poignant and evocative as it is vast.

AA Gill amuses, entertains and moves, as he astutely mines the depths of human misery and resourcefulness. Despite their relative brevity, the realities contained in these essays make for intense reading. It is Gill’s unique narrative style which ensures they are all the more captivating.

AA Gill is Away is published by Simon & Schuster