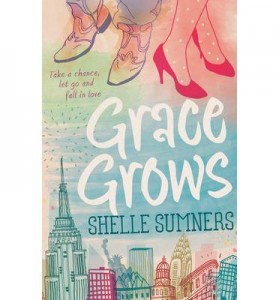 Up until the eBook, not much has been done with the physical novel since the 1700s. Basically, the novel was a bunch of pages bound together. At its most physically innovative, it might have included some pictures, otherwise we just rely on the words for profundity.

Yet, more and more authors and publishers are extending the physical form. For instance, some electronic stories, for instance, embed audio-visual elements alongside text. Another example of experimentation with the traditional novel is the use of soundtracks. Whether or not a book ought to have a soundtrack is the subject of some debate, but Grace Grows does.

Shelle Sumners’ recent offering is a fairly predictable chick-litty title. Of course she gets the attractive guy and a happy life and such forth, that’s exactly what you sign up for. The novel also explores a typical theme of its genre: the battle between one’s heart and one’s head (no points for guessing which wins out).

The title character, Grace, is quite relatable for literary types. As a textbook editor, she’s a wee bit pedantic and straight-laced. She takes herself fairly seriously, and has a serious relationship with a patent attorney. She pretty much epitomises my view of a ‘grown up’. Yet, there is still room for her to grow. After meeting heartthrob musicial, Tyler Wilkie (seriously, some people on goodreads are fawning over him as though he were Mr. Darcy), she learns to live with a bit more humour, a bit more idealistically, and with a bit more libido. The book unfolds with the ease of a movie.

Grace Grows is a fine example of chick lit for those who are into the archetypal plots and hammy dialogue of the genre. The soundtrack makes things a bit more interesting.

Tyler, the musician, writes songs for Grace through the novel. Although the lyrics themselves are not on the level of maybe-they-are-really-poets, Bob Dylan or Paul Kelly, the book instructs the reader as to how they can access the songs and listen on. Suddenly, the novel takes on a new creative dimension (plus the songs are pretty good!).

Lip is giving readers the chance to win one of five copies of Grace Grows in either paperback or ebook format. All you have to do is email [email protected] saying whether you follow your heart or your head (and why) before 5PM March 15. Remember to include your address and whether you prefer ebook or paperback. Only winners will be notified. Entry is open to Australian residents.

Grace Grows is published by Allen and Unwin.