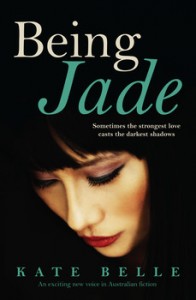 The same night Banjo walks out on his wife Jade, he is killed by a hit and run driver. But his spirit remains, and he is compelled to watch Jade slip into a depression while their daughters struggle to hold things together. Even in death, Banjo aches with love for his wife, despite knowledge of serial affairs.

His youngest daughter Lissy has been oblivious to her mother’s behaviour until she finds a sketchbook chronicling her affairs. She decides this book must hold the answers to her father’s last night alive. Who was in their house when he decided to walk out? As she tracks down each of Jade’s lovers, Banjo is drawn into Jade’s past, where he learns how she felt about their marriage.

It’s worth noting that while the characters in Being Jade are very difficult to like, their story is quite a compelling one. You will find Jade’s thoughtlessness and Banjo’s passivity objectionable; Kate Belle wants readers to feel frustrated. She has designed a narrative that reveals ‘the internal sacrifices we are willing to make to keep our relationships going’.

It’s not always easy to read. Jade is a confronting character. She disappears for days at a time to have sex with random men, ignoring the effect this has on her husband and daughters. She is determined to hold onto her independence, and those around her struggle to understand her behaviour.

On the flipside, her character challenges our very notion of what it means to be a wife and mother. Belle cleverly sets the narrative in a claustrophobic small town, where traditional gender roles are the norm. Jade refuses to be anything other than who she is, and in doing so she will provoke your disapproval, making you just as judgemental as the other characters in the book. This raises some very interesting points about our expectations of women after they marry.

An excerpt of Belle’s work was recently selected to appear in a one-off theatre production called the Madwoman Monologues, which celebrates women’s voices in the arts. Running in November last year, Jade’s monologue, ‘A Woman Like Me’, was based on a chapter that was edited out of the novel. It seems right that her character should live on in this new incarnation, because it would be a waste to relegate her to a single book.

That’s not to say there aren’t aspects of her story that are problematic. While trying to break free from one cliché, Jade seems to fall into another – the ‘whore with a heart of gold’. There is something saviour-like about her encounters with men, who are all damaged in one way or another. After she heals them with her body it’s almost implied that this excuses her disregard for her family.

In my mind at least, the most engaging relationships in the novel actually concern parents and their children. Belle explores how significantly our parents’ relationship shapes our definition of love, and what it means to grow up and redefine love on our own terms. Lissy struggles to reconcile her memories of her parents’ marriage with what she learns over the course of her investigation. Banjo, who grew up in a stable household with conservative parents, can’t understand Jade’s need for an open marriage. Jade, who was raised by a sex worker, refuses to relinquish ownership of her body, even if that means hurting the man she loves.

In many ways Being Jade is a romance novel, albeit a dark and sensuous one. The language is flowery and melodramatic, and also deftly poetic. But Belle doesn’t believe in the simplistic ‘happily ever after’ that follows most fictional marriages. This is a novel about the aftermath, the hard parts, the messy parts. This is a novel about retaining your sense of self in a relationship, particularly as a woman. Though you won’t necessarily like Jade’s character by the end, you will admire her need to rail against social pressures; to be herself, no matter the cost.

One thought on “lip lit: being jade”