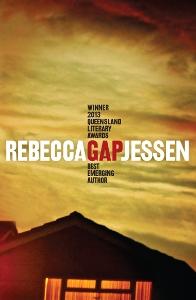 Rebecca Jessen’s debut verse novel is excellent. I’ve read it twice cover-to-cover, and thoroughly enjoyed it. The first time, I read it too quickly to take notes or consider it critically – the narrative positively races along and pulls the reader with it. I had to read it again to be able to write this review.

The influence of legendary Aussie verse novelist Dorothy Porter is immediately obvious. Gap has a lot in common with Porter’s 90s cult classic The Monkey’s Mask; both are crime fiction novels with lesbian protagonists written in plainspoken poetry that is refreshingly gritty and accessible. But that’s where the comparison ends.

just a warning
one he was never gonna
forget

The puzzle at the heart of this crime story does not concern working out the identity of a murderer, but coming to understand, as we learn more of Ana’s story, the kind of desperation that pushes ordinary people into making bad decisions.

just to get to this place
or what I’m gonna do
to keep us here.

The reader spends the novel in a far more fascinating psychological space than if this book were a standard whodunit—the reader experiences the guilt, isolation and paranoia felt by the murderer.

don’t want you to see me

Suspense gets increasingly tense as the police suspect Ana is guilty of a murder the reader knows she has committed. But the reader relates to Ana. She might be a murderer but she isn’t a monster, and she’s trying so hard to turn her life around.

have to stop stumbling

This novel reminds readers that it’s tough for some people to stay on the right side of the law, and their personal history doesn’t always give them a fair chance.

Guess us girls
got Mum’s luck

cops on the doorstep
our Saturday Disney

This story makes a strong political statement. It shows how a murderer might actually be a victim, and how the inequality of society fails people—how young people can so easily fall through the gaps and might never find their way back.

Gap highlights class disparities in Australian society and the gap between the lifestyles of the haves and have-nots.

where
the lawns
and the ladies
have matching
manicures

Book designer Sandy Cull, in the cover art, shows a modest house with a glow behind closed curtains, suggestive of the slow rage smouldering below the surface of suburbia—and the fiery red and orange tones on the cover are evocative of a kind of hell.

made a groove in the couch
with his ignorance

decided to let Mum
sink in too

Everything about the setting and characters feels disturbingly familiar and close to home. The vernacular in particular is so Australian, so authentic.

killed that bloke
didn’t ya?

When Ana’s old high school sweetheart turns out to be one of the police officers investigating the case, the story moves into softer, sensual territory.

In a world of tough love, tenderness might prove Ana’s only salvation.

Rebecca Jessen was the winner of Best Emerging Author at the 2013 Queensland Literary Awards for her verse novel Gap. It is available for purchase from University of Queensland Press.