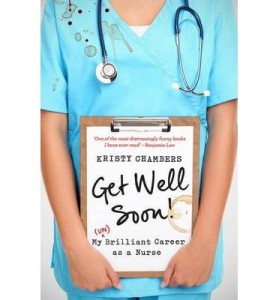 Nursing seems like a cruelly difficult job to me. You’re on your feet all day, working all hours for little pay, and constantly exposed to disease, death, and the grossest of bodily functions. In a refreshingly honest manner, Kristy Chambers has written a memoir about her career in nursing from the premise that the job is far from glamorous.

Get Well Soon! describes, in horrifying detail, Chambers’ ‘(un) brillant career as a nurse’. She starts as a work experience student on the maternity ward. She watches a video of a woman giving birth and decides, ‘not only did I not want to be a midwife or any other kind of nurse, I also no longer wanted to be female’. Nonetheless, she later becomes a nursing student at university, doing placements on a variety of wards in mental health, in the maxillofacial unit ( ‘the ward you came to if you couldn’t be patched up in Emergency, if you had fallen over and practically sliced your nose off your face, for instance’) and the Neurology and Stroke Unit.

Not finding a great deal of passion in any of the areas she worked in, and at times frankly hating her placements during uni, upon graduation, Chambers decides to work in Bone Marrow, with patients primarily diagnosed with cancer and AIDS. For some reason, she thinks this will be okay, but with the dull whiff of death running throughout the corridors, she doesn’t last long. She witnesses some particularly sad deaths and is almost irradiated in a radiation treatment scare involving a Russian man ballooning up ‘like Augustus Gloop’. She feels it’s time to move to a different ward.

She later moves to work in Detox, and subsequently, into giving drugs and alcohol advice to people who have been admitted through Emergency and whose illnesses or injuries are related to substance abuse problems. While she witnesses fewer direct deaths in these jobs, she notes that she is seeing people die over time, often slowly killing themselves. There are a few success stories, but she sees the funeral notice for one of her patients after he left the hospital. This particular patient was sure that he would stop drinking and work to improve his life. She likes to assume that the people she never sees again got better, but ultimately feels ‘impotent’.

You get some sense that although nursing isn’t exactly a fun job for Chambers, she is fond of it. She seems particularly fond of the stories the profession reaps. That’s what Get Well Soon! is, in a way, a collection of anecdotes from the hospital. While there is a minimal timeline, the book doesn’t have a strong narrative arc, it is an illustration of a few scenes and a lot of commentary from Chambers.

In a way, this is good. Chambers gets to the meat of the profession and her experiences there. But, at times, the book has a tendency to become rather listy. Chambers is happy to describe what happens and what she thought of it at the time, but it feels like there is an absence of reflection. We get only a very vague sense of who Chambers is – she’s funny, she’s no-nonsense, but what are her dreams? What does she care about?

The book hints at a deeper reality. Chambers talks a little bit about her own alcohol abuse (which basically dissipated after working on the detox ward), she suggests that her family has a history of mental illness and that she harbours religious beliefs, but there is no more than a brief, fleeting sentence or two on these matters.

I can understand why this is difficult for an author to navigate. A memoir is a perennial struggle between honesty and self-absorption. In some ways, Chambers is very honest. She presents herself in a self-derogatory manner, which can be both endearing and unflattering. For instance, she describes a scene when she throws a tantrum because she didn’t like the uniform she had to wear for one of her jobs. She professes to not really ‘getting’ nursing until seven years into her career (something which may be disconcerting to readers!). She isn’t afraid of seeming silly or even lazy. Yet, there is a certain vulnerability still missing. Indeed, a little bit of extra detail wouldn’t have made me feel that Chambers is self-obsessed.

For instance, at one stage Chambers witnesses the death of a patient, and it is the first dead body she has ever seen in her life. Chambers’ sadness is clear, but it is so matter-of-fact. It’s hard, as a writer, to exploit the misfortunes of others and truly explore grief without feeling as though you are, in some way, taking advantage of misfortune. Yet, it is in this moment of exposure where the writer can really engage with her reader, connecting to feelings that we’ve all felt, and in a way, tell us something about our own experiences. There is more at stake here than reading pages and pages of crying, it’s a moment of transcending the page.

Yet, Chambers’ strength lies in humorous writing and she bravely explores the positively unpalatable. I will never forget the story of the patient who had a three-week-old, smelly tampon removed by a doctor, nor is the story of the couple who used an empty chip packet instead of a condom going out of my mind’s eye very soon. It was further difficult to read the story of a patient’s arse turning inside-out, not to mention the pages and pages of vomit, urine, blood, and faeces. It’s okay though, as someone who is particularly sickened by bodily functions, I didn’t faint once.