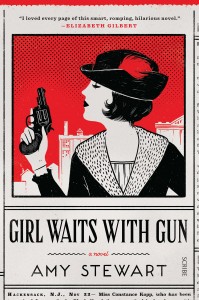 Amy Stewart’s novel Girl Waits With Gun, based on the forgotten true story of one of the first American female deputy sheriffs, is every feminist’s dream read. Brimming with humour, sass, mystery, and delivered to the reader by a narrator so completely resistant to stereotype, Stewart’s novel is worthy of its acclaim from beginning to end.

The narrator in question is Constance Kopp, one of three unwed sisters living on a secluded farm. A violent collision between their buggy and an automobile, which grabs the reader by the throat from page one, hurls the Kopps into a violent legal battle with powerful factory owner Henry Kaufman. Over the course of four hundred pages—and under the instructions of the town sheriff—justice is sought for mothers and daughters alike, mysteries are unearthed and reburied, and Constance Kopp blossoms into a feminist heroine the likes of which 1914 had rarely seen.

Stewart’s power as storyteller is exemplified by her presentation of misogyny, in all its complexities. As women in the early 20th century, Constance and her sisters, Norma and Fleurette, are constantly berated by their brother, who believes it his duty to look after them. Fleurette in turn, as an attractive and helpless teenager, is heavily objectified and violently harrassed by the Kaufman gang. Lucy Blake, Henry Kaufman’s mistress and mother to his illegitimate child, has her life torn apart by societal disapproval for unwed mothers and bastard sons.

As a female reader, I was drawn to Stewart’s writing style to the extent that I felt the sting of Kaufman’s catcalls and abuse as though they were directed towards me.

The content of this narrative is certainly not for the faint-hearted. Amidst the severity, however, Stewart interweaves a delightfully boisterous humour, which transforms Girl Waits With Gun from a weighty read into a rollicking one. Towards the end of the novel, for instance, Constance spends an evening involved in a dangerous street-corner meeting, with a gun hidden in her handbag. The passage is gripping and perhaps the closest the novel comes to a hardboiled crime novel rewrite. The newspapers, however, later describe their plight as though it’s all fun and games:

‘Immediately he fired several shots at me and I fainted from fright…we have a dandy magazine gun that we would love to turn loose on one of the skulking night prowlers…Oh, for a Chance to Shoot at the Nasty Prowlers!’

‘The papers have made a joke of our situation,’ Norma says, ‘which I knew they would do.’ Fleurette also laughs and tells Constance, ‘You’ve never fainted in your life.’

The evident disparity between reality and representation, despite its humourous tone, is able to resonate with modern women, and certainly resonated heavily with me. Today, a woman’s personal testimony of verbal and/or physical abuse is often belittled by a man, or explained away and blamed on emotional overreaction. The undermining of Constance’s ordeals by male journalists and lawyers might feel irrelevant due to the novel’s historical setting, but this dynamic still forms a large section of the tapestry that is the twenty-first century patriarchy.

This is my favourite thing about Constance. Her inability to fit the mould expected of her naturally forces her to shape her own—an identity completely perverse to that of complacent housewife and doting mother. What is also wonderful, and touchingly genuine, is that it takes Constance almost the entire book to accept this about herself. This fear of being different is something that, in the contemporary age of individuality and self-expression, most of us grapple with on occasion.

That the real-life Constance Kopp could face these fears head on and forge a path for women in the police force solidifies her as one of the most inspiring feminist heroines any novel has seen for a long time.