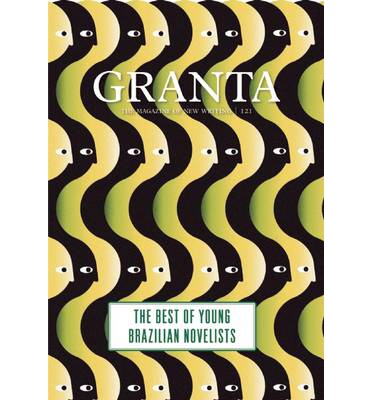 Granta is one of those literary journals you’re told to subscribe to when you study writing. It publishes the full gamut of linguistic genres – poetry, prose, fiction, non-fiction – in quarterly instalments. Usually the writing it features kind of makes a budding writer ashamed to call themselves a ‘writer’ while the understated beauty of the journal’s innards are cruelly juxtaposed with one’s workstation rife with A4 sheets of abandoned poetry and a hard drive full of rejected articles. But maybe I’m projecting.

Granta edition 121 is especially cruel. The edition features ‘The Best of Young Brazilian Novelists’. Any publication which specifically features ‘young people’ is really just anti-Prozac for someone who fancies themselves a writer. It’s too much to handle. Like, I can read George Orwell and think, ‘oh my God, that’s perfect’, but it barely matters since George Orwell is freaking old and I’m young so I have heaps of time to be better and maybe as good as Orwell one day if I work very hard for years and unless I anachronistically succumb to dysentery but hopefully not I don’t think. It’s legitimately insane to be jealous of old timey literary greats. But when I read something written by someone young who is still alive and it rocks, I go into existential crisis territory. ‘What am I doing with my life? Why did I spend so many hours watching countless episodes of 30 Rock, going out with friends, and turning up to my job when I should have been working on my writing so then maybe I could hope to be as good as this writer?’

Luckily for me, Granta has a pretty lax definition of ‘youth’. The short stories included in this edition were all written by people born after 1973. I decided that if some of these writers are closer to my parents’ age than mine, they are not, in fact, young, and therefore envy would be a ridiculous emotion to expend my energy on. I was put to considerable ease by the idea that I Still Have Time until I turned the page over to Luisa Geiser’s biography. She was born in 1991. I out-date her. When I graduated school only five years ago, she would have been two years from finishing. Yet her novel was published last year. Damn Geiser for making such good use of her time! I was hoping for my sake that her story would be horrible but of course it wasn’t. It brought to light the subtle complexities of a mother/daughter relationship better in five pages than what decades of therapy ever could. Plus, it had a cat in it.

The young Brazilian novelists’ edition of Granta, in a way, was practically designed to promote existential crises amongst readers. To give you some idea, the Best Young Novelists series have has been described (by Granta, no less) as ‘the most accurate literary crystal ball’. Granta has introduced the world to Salman Rushdie and Zadie Smith amongst other writers whose names are actually recognised by the general public, who rightly win bucket-loads of awards, and in some cases are important enough to face exile under a selection of political regimes.

While I didn’t recognise the names of any of Granta’s Best of Young Brazil, there are a few names I would very much like to see again (strictly from an aesthetic point of view, let’s forget my emotional stability for a second). Ricardo Lísias’ story, “Evo Morales” had perhaps the best line of the volume in it, ‘Sometimes I can scarcely believe I’m the best chess player in the world’ in his exploration of the pitfalls and loneliness associated with being, well, the best chess player in the world. Carola Saavedra’s “Every Tuesday” involved a very sweet unravelling of a therapeutic relationship. The main character, Laura, seems to narrate the dialogue as though these two people are friends and that she understands the intricacies of his personality, when in reality she’s paying him to listen to her talk about her sex life. In Vanessa Barbara’s “Lettuce Nights”, I fell in love with the old couple she captures, felt the full tragedy of the wife, Ada’s, death. Really, this story is a celebration of living simply and modestly, ‘Ada dealt with the various household details and chores while Otto followed her around telling anticlimactic stories’.

Other highlights include Leandro Sarmatz’s “The Count”, which conveys the stark danger of returning home from exile – even when home calls out completely and viscerally. Home is also explored in Carol Bensimon’s “Sparks”, though she picks up on the difficulty of returning home after spending a long time elsewhere. She writes:

For some reason, what I was trying to do was rebuild the street of my adolescence and my difficulty of achieving that made me think about those little books you get in Rome where, by superimposing two images, you can see something that was once grandiose where now there are only remains of columns, marble blocks or a sizable area of grass.

Julián Fuks’ “The Dinner” is a powerful portrayal of the frustration of talking politics with somebody who disagrees vehemently with your views, and who lacks the compassion to understand the full realities of oppression. Meanwhile, Javier Arancibis Contreras’ “Rat Fever” is a deeply creepy exploration of isolation and disassociation. ‘The only thing that makes life bearable is that it comes to an end, son’ is a key line that echoes. It also provides an intriguing counterpoint to the aforementioned “Lettuce Nights”. Plus, it has a cocaine-eating rat in it!

The fact that all the writers featured identified themselves as Brazilian adds an extra layer of interest to the collection. Before reading it I held the assumption that because the writers were based in South America, they would all be magic realist writers. This is not the case. Realism is the order of the day here, in some cases quite dirty realism. To be fair to my ill-founded prejudices though, some stories have a bit of a magical quality to them, particularly in descriptions of landscape or dreams and other imaginative sequences. For instance, in “Blazing Sun”, Tatiana Salem Levy describes an imagined scene of the city of Rio de Janeiro ending with a tsunami with the ocean becoming semi-personified:

The sea peeling back its own flesh, leaving exposed and airless, for a few seconds, its deepest inhabitants… Unhurriedly, but magnificently, the ocean would engulf the entire city… Only the tops of some of its hills would be left uncovered… Anyone here would have the right to see one last image: Rio de Janeiro submerged by the sea itself. Limpid Rio, translucent beneath the water, the extreme beauty of the disaster.

She goes on to describe the ocean expanding further ‘until it found a trace of sand on which to rest. And Rio de Janeiro would be a mere vestige of a marvellous city, lost in the ocean’s depths, inhabited by fish and corals.’

But despite any possible nods to mysticality, don’t think this volume is necessarily a stop gap until Isabelle Allende’s next novel comes out. Also, don’t think that the writers have necessarily spent their whole lives hanging out in Brazil – most seem to have lived or travelled extensively in other parts of South America, the US, and/or Europe. Alas, another reason to feel jealous.

Granta’s issue 121 is good. But that’s the problem for potential readers out there who are writers. It’s going to make you feel bad.