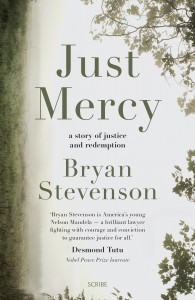 Last year, Eric Garner, an African-American man, was killed by police.  Law enforcement officials had him in a chokehold, despite the NYPD prohibiting their use. This event caused a wave of protests, and the phrase Black Lives Matter.

Syreeta McFadden wrote for the Guardian US: ‘We declared in 2014 that Black Lives Matter because we saw how often they didn’t…in the lives of black people in 21st century America, we still struggle for unquestioned personhood.”

Black lives matter. But quite clearly, they don’t to protectors of the law. The shooting of Michael Brown, an 18-year-old black man in Ferguson, Missouri in August last year provoked vigorous acts of anger and protest within the US. Racial politics in America are at break point; systemic injustice exists in all levels of law enforcement.

The executive director of the Equal Justice Initiative, Bryan Stevenson. has won national acclaim challenging bias against people of colour. He has represented capital defendants and death row prisoners since 1985, the year he graduated from Harvard, and his new book, Just Mercy, highlights racial and economic inequalities in the justice system.

Written in first person, Just Mercy reads like a personal diary. Stevenson is unashamed to recall the chilling moments of undertaking an internship in Georgia’s Death Row. With the electric chair being alarmingly close by, Stevenson explains that prisoners are housed in windowless concrete buildings that are hot and uncomfortable. Cells are only five by eight feet, and contain only a metal door, commode and steel bunk. Seeing this harsh treatment inspired his career:

‘My short time on death row revealed that there was something missing in the way we treat people in our judicial system, that maybe we judge some people unfairly…presumptions of guilt, poverty, racial bias and other social, structural and political dynamics have created a system that is defined by error.’

Much of Stevenson’s book recounts his work defending Walter McMillian, who was convicted of shooting a white female sales clerk, and later released after six years on death row.  Stevenson explores the theme of racial and sexual taboo, as well as the perceived duty of Law Enforcement Officials to punish black men for being intimate with white women. This is linked to slavery’s racial hierarchy and the continuing subordination of African Americans.

Stevenson also explores the injustice of solitary confinement, which is inordinately dealt out to prisoners who are people of colour.

‘Solitary confinement in Apalachee means living in a concrete box the size of a walk-in closet…if you act out by saying something insubordinate or refusing to comply with an order given to you from a correctional officer, you are forced to sleep on the concrete floor of your cell without a mattress. If you shout or scream, your time is extended; if you hurt yourself by refusing to eat or mutilating your body your time is extended, if you complain to officers or say anything menacing or inappropriate your time is extended.’

This is the kind of gritty reality and inhumane conditions that are told throughout Just Mercy. Some stories of abuse retold in the novel are particularly disturbing, but it is real. And it happens. The predisposition towards unthinkable acts like rape, torture and abuse is still very much integrated within society, and this needs to be remembered, thought about, spoken about and understood as being an actual thing that people experience. The ignorance of another person’s humanity and wholeness in any respect, is in my opinion, an almost unspeakable thing.

The book is not easy to read and digest. Just Mercy is enthralling, engrossing and educational, even if the content is heavy and potentially depressive. But it is incredibly important to read.  Stevenson shares an immense amount of knowledge and encourages us to become aware and mindful of these critical issues that are still happening in the justice system of America. He believes that the true measure of our character is how we treat the poor, the disfavoured, the accused, the incarcerated and the condemned.

Just Mercy is a timely exploration of the injustice facing minorities in the US. We can only hope that authorities will use resources such as this to enact change.