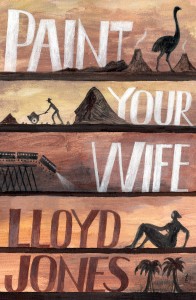 It’s a theme which drives his 2008 novel Here at the End of the World We Learn to Dance in which the tango becomes a way to survive WWI.

The idea also surfaced as the focus of his novel Paint Your Wife. Spanning from WWII to present day, the narrative tells of the love affair between Harry Bryant’s mother, Alice, and the local artist Alma. Alice poses for a portrait ‘in lieu of payment’ after Alma rids her house of rats; hundreds of portraits are subsequently produced, as the women of New Egypt discover a way of being appreciated whilst their husbands are at war. A generation later, with Harry as mayor, the now dying New Egypt finds itself in need of Alma’s art yet again.

This is a deeply beautiful book, set against such a rich landscape of countryside and sea. The residents of New Egypt seem almost blown about their lives, at the mercy of nature—this shows most when Alice’s husband George sets out to move a hill to prove his love for her. The town is shocked; as an outsider remarks, ‘Hills don’t move.’ The New Zealand landscape proves a more prominent character than many of the people, creating a highly textured, almost alive, narrative.

I will admit that I had doubts about the theme of the book; writing about the painting of women runs a high risk of coming across as voyeuristic. Indeed, the women often pose naked for Alma’s drawings, which becomes steadily creepier the older Alma gets. The fact that these drawings were ‘in lieu of’ payment—i.e. for money—formed the crux of my wariness.

I was also disappointed with Lloyd Jones for conveying drawing as something only the men are capable of. I would have liked for one of the town’s women to take up the art as well, to subvert the gender roles if only slightly.However, despite the signs this is not a voyeuristic novel. Whilst having the potential to represent women as objects for male appreciation, the thematic context of these drawings leads to a much deeper interpretation.

In my opinion it is not a voyeuristic novel—it is a paying of respect to the female identity. I finished the book feeling not as if women had been ogled at, but as if they had been appreciated for every shape and size that they were.

What makes Paint Your Wife so heartbreaking is the theme of abandonment. Harry’s father runs away;  the town’s steadily shrinking population; women abandoned for war. In this light the drawing suddenly becomes less about the men watching, and more about the women posing, finding themselves again.

As Harry observes, ‘in learning how to draw what you really learn is how to see. Once you learn how to see, good or bad or better doesn’t come into it. Yearning just flies out the window. The only thing of consequence is what sits before you.’

Drawing ultimately becomes a way for the genders to look at each other and, for the first time, properly see what is there.

This depth of meaning and content is what makes Jones’ writing prize worthy (his novel Mister Pip won the Commonwealth Writer’s Prize in 2011). In fact, Paint Your Wife is so bursting with plot and character that I wished many relationships had been developed further. Alice, for instance, hardly appears in present day, let alone her relationship with Alma. With a counter narrative focusing so heavily on their affair, it was disappointing to see so little of them in Harry’s narrative. But is this not the case for all great books? No matter how many pages it has, you’re always left wishing for more?

The fact that I as a woman was left with this feeling confirms the work for me, not as a work of voyeurism, but as a literary tribute to women.

The title Paint Your Wife does not compel husbands to remove his wife’s clothes and idealise her–it instead implores him to see her for who she really is, and love her for that.

One thought on “lip lit: paint your wife”