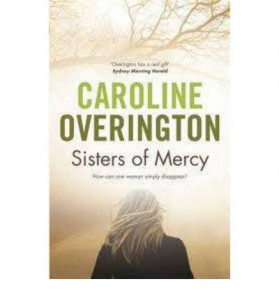 I’ve never felt so cheated by a book before in my life. Maybe it was my imagination, but I thought Caroline Overington’s Sisters of Mercy promised crime, mystery and intrigue. To be fair, this book offers all these things, and plenty more. It is a compelling, captivating story. But what it gave me and what I was expecting were two completely different things, and somehow that shook me right out of the book.

After meeting her much-older sister Agnes for the first time in her life, a sister she never knew she had until her parents’ death, Snow Delaney finds herself in prison. Her English sister has walked off into the red dust which covered Sydney on the 23rd of September 2009, and disappeared. Journalist Jack Fawcett is convinced Snow has something to do with Agnes’ disappearance, and when Snow starts writing to him from prison, to put right the lies he wrote about her and her family in his articles about the case, Jack writes back, hoping to uncover the truth about what really happened to Agnes.

There is no question that Overington can write. The first page is proof of that. But it is impossible to forget that Overington was also a journalist herself, and, while I understand that her character Jack is a journalist too, and therefore it makes sense for him to recount his coverage of this case to the reader as a report, I found myself wishing that he wasn’t telling the reader this and telling the reader that. His reports are a stark contrast to the letters Snow writes to Jack from prison, which are filled with strong characters who have influenced Snow’s life. It is in these letters that Overington’s skill shines through, and it is disappointing that Jack’s parts of the book take away from the strong narratives in Snow’s letters.

About halfway through the novel, I got to the point where I simply couldn’t put the book down anymore – I wanted to get to the end, I wanted to find out what happened, I wanted to know how Overington was going to finish this thing off. Page-turners are great – as long as the ending is worth the thrill of flying through page after page to get to it. For me, Sisters of Mercy didn’t do it. I was so bitterly disappointed with the way Overington chose to end the book. Maybe I expected too much but to be honest, I don’t feel like it’s unfair to expect something from the ending, and I really felt like I got nothing. I’d postponed my afternoon so I could finish reading this novel, to get to the end, and then I got to the end and it wasn’t what I was expecting. I suppose this could also be said to be one of the positives about the book. But Overington didn’t even subvert my expectations – they just simply weren’t met.

Still, the insight Overington provides into Snow’s character, mindset, and absolute resolve that all the choices she’s made, everything she’s done, is right and lawful, is somewhat unsettling. To enter the mind of a character like Snow who cannot see the error of her ways or contemplate another person’s view of the world really makes you stop and question your own mindset. It makes you wonder if your own perception of the world could be as warped as Snow’s is, and then it makes you second-guess yourself and wonder if it is Snow’s perspective which should be declared as normal.

I was really looking forward to reading this book, and even though I was somewhat dismayed by the ending, the book is a good read. Overington’s juxtaposition of Snow and her sister Agnes and the two very different lives they’ve led despite their shared genes, highlights the fact that life is what you choose to make it. While the book may not be what you expect, it takes nothing away from Overington as a storyteller and her ability to create characters which jump off the page and speak to you. This is a book which keeps the reader hooked in the mystery to the very last page.

Sisters of Mercy is published by Bantam Australia.