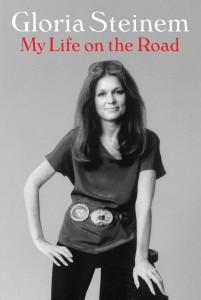 When I first entered the room and upon seeing so many older women, I was unsure if I would feel comfortable as a member of the new generation of feminism. I wondered whether Gloria Steinem, a prominent 82-year-old American feminist, would touch on contemporary feminist issues. This feeling of discomfort faded when the event kicked off and she began talking about issues like domestic violence that are still very much on the feminist radar.

My eyes swelled with tears when Gloria announced this frightening statistic: If you combine the number of deaths resulting from 9/11 and the Afghanistan and Iraq wars, the number is far less than the amount of women murdered at the hands of their husbands or boyfriends in America. This is the reality of domestic abuse and its severity in the United States, which is not dissimilar to our own country, where one woman is killed each week by domestic violence.

Steinem’s biographical novel, My Life on the Road, contains a meaningful dedication to a male doctor who enabled her to have an illegal abortion on the pretense that she wouldn’t tell anyone and that she would live her life vivaciously. The author, editor, feminist and co-founder of Ms. Magazine said that it was ‘time to say thank you’.  She then laughed at her critics who shamed her when she got married at age 66, revealing that she only got married because her South African partner ‘needed a green card’.

A highly intelligent and educated woman, Gloria claimed that she didn’t attend a whole year of school until she was 11 years old. Instead, she lived on the road with her gypsy father, who bought and sold antiques. While Gloria said her dad was a kind-hearted man, who would park his car  ‘far enough away that it wouldn’t get repossessed’, her mother was an editor who succumbed to the pressure of the family’s financial burdens. Gloria described her mother as a ‘passive passenger’ who followed her father’s life, resulting in a nervous breakdown and her mother becoming hooked on an early form of tranquiliser.

The setting was one of grandeur: chandeliers swaying from the high ceilings; crimson seat covers.  However, the setting lost its intimidating power with Gloria’s warm presence. Leaning comfortably into her light blue chair, Gloria embodied a rare charm that transformed Sydney’s Town Hall into a living room.

Steinem said that when half the human race is told that they are superior to the other half and gender expectations are reinforced by a patriarchal society, ‘some men become hooked like a drug to dominance’.  A recurring point of conversation was reproductive rights and how the patriarchy has cornered women into submission, removing female autonomy over sex and pregnancy. Steinem said reproductive freedom is a ‘fundamental human right’ and that ‘nothing is more important’. With conviction she argued that humans are linked, not ranked. She emphasised the importance of intersectional feminism, drawing on Native American beliefs, such as women having control over the timing and nature of childbirth, which were an ‘inspiration for the suffragette movement’.

However, the highlight of the night result from an audience question, when a school teacher in her 40s asked Gloria what advice she would give young teenagers when they are slut-shamed. After Gloria admitted that when someone calls her a bitch she says ‘thank you’, the woman replied that when she is called a slut she usually tells the slut-shamer:  ‘I’ve enjoyed every minute of it.’

Gloria Steinem received a standing ovation and after hearing her speak, it’s obvious why she is referred to as America’s most famous feminist. Her mantra is that she does not want to build a ‘bridge of let me help you’ but rather, ‘let me learn from you’, a humble statement from a woman who has fought on the battle line against misogyny for seven decades. She appeared like a feminist vision and left us all feeling inspired, with both men and women coming forward to express their gratitude.