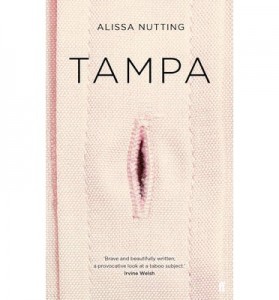 Quite an opening, right? This is how Alissa Nutting’s Tampa begins, plunging the reader straight into the highly sexualised interior monologue of Celeste, a twenty-six year old school teacher.

Celeste lives a double-life. First, she is a friendly and diplomatic teacher who knows how to get her pupils interested, doting wife of a policeman with inheritance, and has a badass red Corvette with tinted windows. In her second life, those tinted windows are put to good use (good in the effective sense, not in the moral sense) as she courts and has sex with teenage boys under her charge.

It seems like Tampa is set up to answer the question: what if Humbert (of Lolita) were a woman? But not quite. Although the books are thematically similar in that they both describe lust for children who are somewhere between pre- and post-puberty, Celeste seems to have more in common with Patrick Bateman of American Psycho than Humbert. Her narrative voice reads like a sociopath, laced with subtle humour, but not-subtle-at-all descriptions of her predatory behaviour.

Celeste has no love for her sexual conquests. She’s annoyed when they express anything other than innocent enthusiasm and spends much of her ‘relationships’ figuring out  how to end them when the boys slide into physical maturity while being sure that no charges will be laid against her. She says of her perfect ‘partner’:

Extreme growth spurts or pronounced muscles were immediate grounds for disqualification. They also needed to have decent skin, be somewhat thin, and have either the shame or the preternatural discipline required to keep a secret.

While these words are intended satirically, reading Tampa made me feel kind of dirty. Hebephilia (sexual attraction to persons aged 11-14) is taboo for good reason, and Celeste preys on the naivety of her conquests, using her authority as a teacher to do so. Although the boys seem to enjoy it, they don’t seem to realise that Celeste doesn’t really love them and specifically does not want a future with them. The power-imbalance, mixed with the lies renders Tampa uncomfortable reading indeed.[1]

Nutting’s prose is an engaging character-study of Celeste, unfortunately to the exclusion of other characters, who are undeveloped stereotypes. It’s especially difficult, as a reader, to understand the boys Celeste is using for her own sexual satisfaction. Celeste dehumanises them considerably, which is unsurprising, but the fact that they are almost nothing outside her own assessments as silly boys who live for nothing but sex is frustrating as a reader. I wanted to actually bear witness to the same complexity that Celeste ignores.

Also, if you don’t like sex scenes, this book is definitely not for you. There are many. Too many. It gets to the point where I had to skip pages thinking, ‘yeah, I get the point’. Again, it’s very similar to American Psycho in the level of detail Celeste unashamedly divulges. The impact of the sex scenes are reduced considerably by their multitude. It may be Nutting’s intention to satirically drown the reader in unusual detail, but it seems a bit like a cop-out to me. The detail overtakes any sense of character and thematic exploration. Minimalism can also actually provide better ground for dramatic interest than over-the-top detail. Think of how Alfred Hitchcock managed to create some of the scariest films in the Western world without special effects. Likewise, in Lolita (since Tampa seems to invite natural comparisons with Lolita), Humbert never actually describes sex with Lolita, just his desire. With the power of minimalism in mind, Nutting squanders the opportunity to explore desire, deviant desire particularly. Anticipation and subtle suggestion probably could have been used better. But, then again, it seems like the whole purpose of Tampa is to make the reader feel vaguely ill.

The upside of the dense detail included in Tampa is the refreshing nature of Celeste’s direct voice. There are no euphemisms; there is no second-guessing Celeste’s intentions; and at times, the book really does cause a giggle.

[1] Not to mention the fact that the salacious cover renders reading Tampa in public somewhat difficult.