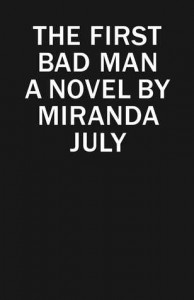 Miranda July sees the world askew. In her work as a writer, filmmaker and visual artist, she peeks behind exterior lives to look at the secret inner world. Though often unsettling, her work emboldens the meek and celebrates the weird. Preceded by her award-winning short story collection No One Belongs Here More Than You (2007), The First Bad Man is July’s first (and much anticipated) novel.

Narrator Cheryl Glickman is a woman in crisis and a long sufferer of globus hystericus—a hard lump in the throat thought to be psychosomatic. Approaching middle age and living alone, Cheryl is the longest standing employee of Open Palm, a company that teaches women’s self defence. At the owners’ request she now works from home, her managerial style deemed ‘more effective from a distance’. However, Cheryl’s retreat from the world is largely self-imposed and through a carefully devised system she efficiently minimises her presence in her own life.

At its best, my system gives me a smoother living experience. My days become dreamlike, no edges anywhere, none of the snags and snafus that life is so famous for. After days and days alone it gets silky to the point where I can’t even feel myself anymore, it’s as if I don’t exist.

Cheryl intrigues and endears through humorous idiosyncrasies: walking into rooms sideways to show off the ‘darling little shells’ of her ears; searching the faces of children in supermarkets hoping to recognise her spirit baby, ‘Kubelko Bondy’; reading a book while standing next to the shelf with her finger in its place for ease of reshelving. On their own, these traits are inventive and funny, but each forms a brick in the wall she builds around herself. Even her sexual fantasies map a retreat: creating ‘a fantasy within a fantasy within a fantasy … building in intensity until I was so far inside myself that I could go no further.’

And then along comes Clee. Sloppy, sexy and self assured, she is the rambunctious daughter of Cheryl’s employers and is everything Cheryl is not. When she finds herself in need of a place to crash, her parents send her Cheryl’s way.

Contrary to what its title suggests, The First Bad Man is a story about women—how we connect and communicate with each other and the wider world and how we negotiate our roles as mothers, lovers, friends and adversaries.

By withdrawing from herself, Cheryl has lost touch with her femininity. In the diplomatic words of Phillip (the man she harbours feelings for and who is, in fact, in a relationship with a sixteen-year-old), she is ‘perfectly balanced … in terms of [her] masculine and feminine energies’—read: sexless.

By contrast, Clee is open, and people—particularly men—gravitate to her. She’s self-possessed and comfortable in her femininity, in a way that Cheryl finds intimidating: ‘She was a woman. So much a woman that for a moment I didn’t know what I was.’

Clee’s presence—her womanliness—oozes and invades, and with her preference for keeping the television on at all hours, piles of unwashed underwear and pungent foot fungus, Clee upsets the order of Cheryl’s ‘system’. Like a schoolyard bully, Clee pokes and provokes and finally turns violent, forcing Cheryl to engage and propelling her into action.

As we see too often in the news, the threat of violence is used to disempower women. When violent acts occur, we are told not to venture out alone—even in daylight—and if we get hurt, it’s our fault. We are made to appear helpless. However, July uses violence to embolden and empower Cheryl. In playing out scenarios from Open Palm self-defence DVDs, Clee physically breaks down Cheryl’s barriers and pushes her to sound out her strength and fight back. These scenes are primal. Sexual. And see two women reclaim a space in which they are typically cast victims.

Through Cheryl’s relationship, or lack thereof, with Phillip, and the peculiar arrangement between her doctor and his secretary, July also considers how women position themselves in relation to the men in their lives. She questions the power we give them and our failure to call out their bad behaviour, especially against other women.

Far more nuanced than ‘quirky’ (the term too often used to dismiss creative women), July’s style is a biting-on-foil, picking-at-the-quicks-of-your-fingers humour—shot through with sincerity and tenderness. In The First Bad Man, July seeks out a woman at her lowest point and takes great joy in finding unlikely ways to help her connect with her bolder self and realise her ambitions and long-repressed desires.

One thought on “Lip lit: the first bad man”