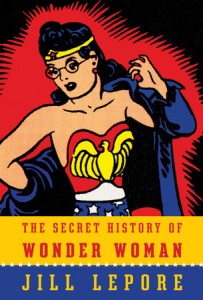 ‘Great Hera! I am running so late today!’

‘Aphrodite aid me in getting through this after-lunch meeting!’

‘Suffering Sappho I am exhausted!’

Not curses we hear in today’s world – but wouldn’t we all secretly love to make such glorious exclamations?

Wonder Woman did. In Jill Lepore’s readable new book The Secret History of Wonder Woman, she introduces us to the tiara-toting, revolutionary comic strip character who wore hotpants in the forties and regularly used such feminist curses.

The book details the birth, development, descent into obscurity and subsequent reincarnation of the first powerful female comic strip character and demonstrates her place in the first-wave feminist movement of America.

Lepore also includes carefully selected excerpts from Wonder Woman cartoon strips to wordlessly reveal the parallels between her story and those of the women in creator William Moulton Marston’s own life. In addition, readers are treated to sixteen pages of annotated colour images of Wonder Woman covers, scenes and artistic representations from her beginnings in the early 40s through to her reincarnation in 1972 on the cover of Ms. magazine’s first regular issue.

Wonder Woman is controversial in a number of ways. At first, her scantily-clad form raised eyebrows amongst the conservative echelons of 1940s American society. She is an Amazon woman, forbidden from marrying or allowing any man to chain her down – both literally and metaphorically. She encourages women to join the war effort throughout the years of WW2 and to speak their minds. She stands for everything women were not allowed to be.

The biographical aspect of the book is two-fold: as well as the comic book character, Lepore details the story of Wonder Woman’s creator, Marston, and his less than conventional family. With a profusion of primary and secondary evidence, her account of Marston’s life reveals him as a somewhat unsuccessful academic, a lawyer, a psychologist, a scientist, the inventor of the lie detector test, and a bigamist.

The manner in which the Marston’s bigamy was veiled for decades is treated carefully and without judgement. Lepore factually recounts his living situation which saw four children and two separate wives living under the same roof. One wife, Elizabeth Holloway, worked her entire life, earning more than Marston himself. His other wife, Olive Byrne, was the mother figure to all four children, a traditional housewife.

Olive Byrne was also the niece of the influential American feminist Margaret Sanger, whose unshakeable belief in the power of educating women about birth control influenced not only Olive but also Marston’s imagining of Wonder Woman.

The controversial comic book character emerged as a powerful, intelligent, sexy, unmarried, loving and caring woman. Wonder Woman encapsulated not one but two women: Marston’s wives. This new type of woman, he believed, should rule the world (and women who ‘have it all’ do now).

Marston’s own goal was ‘to create a feminine character with all the strength of Superman plus all the allure of a good and beautiful woman’. And he succeeded – yet her successful comic book days were numbered.

Marston died in 1947 and Wonder Woman disappeared into the abyss of fifties female submission and conventionality. This period of obscurity for Wonder Woman coincided with a quietening of women’s lib movements in the post-war world. She remained in relative obscurity until second-wave feminism took hold of America in the late sixties; suddenly she was called on again. She reappeared on the cover of Ms. magazine in July 1972 as a successful figurehead of the seventies feminist cause.

In presenting the book chronologically and interweaving Wonder Woman’s development with that of feminist movements, Lepore offers Wonder Woman as ‘a Progressive Era feminist’ and the ‘missing link’ between feminist struggles of the early 20th century and the seventies.

The work reads more like an engaging story than a history book. It is a highly relevant treasure box of biographical, social and cultural importance for both men and women of the 21st century. Women today are, in many ways, still striving to be Marston’s new woman with Superman’s strength and Aphrodite’s beauty and goodness.

Ultimately though, Wonder Woman reminds us that this strength and goodness is, in fact, best used in the service of others. Mind you, that’s not to say that the odd curse here and there isn’t acceptable. Merciful Minerva!