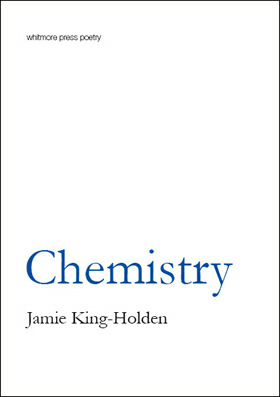 I feel privileged to review this unassuming little gem of a chapbook. It’s a debut collection from a young poet and, as such, it has received reviews that are positive while at the same time mildly condescending, with some reviewers noting that the poet’s voice ‘is still developing’. I’m sure the same could be said for practically any poet, regardless of age! I really admire this volume and I think Jamie King-Holden’s Chemistry is a powerful work that can sit proudly beside books from older, more established poets.

The opening poem, ‘The purple labrador’, hits like a punch. It manages to encompass so many of life’s small (but no less painful) tragedies in the one poem, culminating in this devastating scene:

… My car lifts and drops and a thick slow
whine filters through the floor,
The radio, the window. This is how he died. With thick
purple blood matting his honey
Fur; his entrails spilling like a flower; his owner’s
moccasin held gently in his teeth.

Likewise, the poem ‘Meeting a father’, written from the perspective of an estranged daughter, carries tremendous emotional weight:

As I unravel like a helix.
He forms a goodbye,

Begs for the door, and
Disappears into a century.

In many ways, the book relates a coming-of-age journey, in which the poet learns many things—from matters of science to matters of the heart—all amid the familiar (and somewhat foreboding) backdrop of suburban Australia.

In ‘The scorpion and the frog’, the poet writes to an old crush on a garish postcard bought at the local fish ‘n’ chip shop:

In blue pen I tell you we were both wrong
About stars, and quickly send it away to
The scribbled address you left on the fridge.

In ‘After’, the poet discovers that love ‘is not a 70s sitcom voiceover’, and in ‘Please find yourself in this poem’, she ponders the meaning of a call from a public phone booth, delightfully using the lingua of mathematics to express the sum of her emotions:

Please correct me if I am wrong, but if my calculations
are accurate,
Those 37 seconds you spoke to me from a telephone
box on Paddington
Station are greater than or equal to ? the sum of
everything100.

As a poet, King-Holden is curious about how the world works and the heartaches people quietly carry with them. Her poems are grounded in urban realism, and yet at the same time, they are surreal, too. In ‘Postcard of a sunset’, the poet claims to be a ‘free spin on Wheel of Fortune’ and ‘a sentence in a garage-sale Golden Book’.

The poem ‘Terranaut’ describes the movements of a man who wanders the car park late at night ‘like a basket of laundry that got up and / Walked’:

…Once, he
Called out for the number thirty-seven bus to the
Park, and lost his voice in the black hole of his chest.

King-Holden’s poems are nostalgic, endued with a sense of suffering and loss. In ‘Backyard violence’, a piece in which the poet witnesses her father behead a snake with a shovel and bury a poisoned pet, ordinary objects become strange and ominous:

The trampoline holds a calamity
Of toys; a naked doll’s sun-warped
Face frowning at the universe.

And in ‘At the bottom of her stairs’, the poet observes the subtle signposts of poverty and domestic violence in a family home:

I look up
Seventeen threadbare
Stairs to your cheap pine door,
The keyhole bruised,
Two rust-laced hinges
Crying.
I imagine you somewhere
On the other side,
Purse waiting on the bed,
Applying 24, Faubourg
To a small spot
Just above your heart.

These poems are brave and honest; they acknowledge the despair of everyday life and challenge the reader to consider the cruelty and eccentricity of society—to discern its contradictions and common horrors.

In ‘Dissection’, the poet recounts a casual conversation with her lab partner after a class in which they cut open a toad whose heart is still beating:

I tell my partner that I’ve tried to get
Rid of the blood. ‘White King’,
She suggests.

The poet invites readers to partake in these conversations, to recognize themselves in the familiar scenes and spaces she depicts in her poetry, and to question definitions of normality and, indeed, humanity.

In ‘Please find yourself in this poem’, King-Holden suggests readers do so:

In the way you would a dedication for a dusty love song
—Lady in Red, perhaps—

And such an offer is simply too good to refuse.

Limited copies of Chemistry can be ordered from Whitmore Press, with each book signed and numbered by the author.