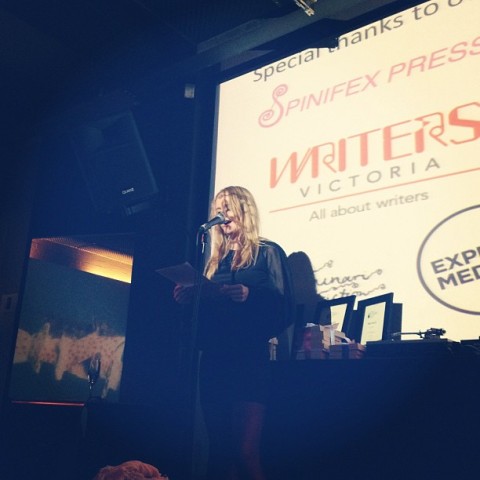 A Melbourne bar called Loop was the place to be on Saturday night as Lip celebrated the launch of Issue 23 and handed out some excellent prizes for the very first Rachel Funari Prize for Fiction. It was a crisp evening but many writers (and accompanying friends and family) braved the weather and joined in the fun. There were mini-cupcakes, cheap ciders, and adorable props thanks to Managing Editor Jo Mandarano, and our resident photographer Romina Juliette was there to capture it all with her Canon 5D.

Editor-in-chief Zoya Patel MC’d the night and, as far as I could tell, did an awesome job of remembering everyone’s names. She spoke about the future plans for Lip, including moving to an annual print edition and increased focus on our newly redesigned website.

Three of our five esteemed judges were present. Clementine Ford, Karen Pickering and Kat Muscat presented awards, addressed the guests, and were promptly swamped by feminist fangirls afterwards. Our  judges spoke about the importance of listening to women’s stories and the strong role Lip plays in making sure women’s voices are heard. They also emphasised the quality of the entries received in the fiction competition.

Unfortunately our second and third place winners live interstate and were unable to make it for the awards ceremony. Frances Chapman was awarded second place for her story ‘Hunger’ and Jane Downing placed third for ‘Bending Over Backwards’. Our first prize winner, Jo Langdon fortunately made it, and read her piece ‘Girls Upstairs’.

After the prizes were announced, the latest print edition of Lip was officially launched. We sold a fair few copies, but if you missed out, fear not. You can head to our website and pick up your very own copy right now.

Once the formalities were over, readers and contributors mingled, helping break the stereotype of the socially awkward writer. The celebrations went on into the night and not a single cupcake was left behind…