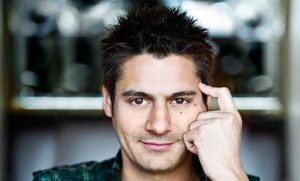 Scottish-Indian comedian, Danny Bhoy looks 21. But he talks with the wit and wisdom of a 50+ year old (that’s meant to be a compliment by the way). And in reality he falls somewhere between the two at the humble age of 38.

The Messenger (Please Don’t Shoot) Extended show at the Enmore was a rather special gig. There was one other comedian in attendance, a young buck in the front row that’s been working the Sydney circuit. It was also a partial reprisal of Bhoy’s show from the previous year. Some of the jokes were repeated but they had been refined and their delivery bettered. Plus, with new material thrown into the mix it made things as enjoyable as a watching a completely new offering, a real testament to how great this comedian actually is.

It’s fair to say that Bhoy is one clever, ahem, boy. His material is full of observations- intelligent sarcasm and pure wit. At times rather personal, some of his best jokes involved his little-guy battles against goliath corporations like The Royal Bank of Scotland, EPSON and Ticketek. The latter also included the fantastic one-liner about the “Singing fetus” better known as Justin Bieber.

Bhoy has impeccable timing. He kept the energy high as he set jokes up like a master craftsman, albeit an animated one. When the punch lines came he was comfortable and confident, allowing the audience to enjoy the joke without milking the idea for too long. He is also a fine dancer, showing us a line-dancing cowboy or a man swatting mosquitoes. And his accent, particularly his skilled take on the ocker Australian one was exaggerated but affectionate. In fact, I’m sure there were a lot of people prepared to adopt this boy as Australia’s new son right there on the spot.

Things weren’t as easy in America, particularly in the Deep South last year where Bhoy’s comedy was rather misunderstood. He acknowledged that his background is a little difficult for them to grasp, given that Scottish and Indian are two very different characters on The Simpsons. But we Aussies have lapped up his smart-arse antics. Whether he was riffing on our idioms (consider: “Too easy” just like Carl Barron); calling muesli sawdust and raisins like a grumpy Dylan Moran; or his lively acting and improvising often with as many jokes and tangents as Ross Noble, they all hit the mark.

At almost two hours Danny Bhoy had managed to take us on one rather mystical journey that had included jokes that ran the whole gamut of history, politics, sex and people. It took in almost anything and everything conceivably possible to laugh at, making it an absolute delight to watch and side-splittingly funny to boot. Amazing.