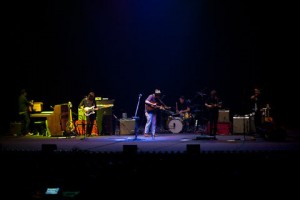 As an early birthday present to myself, on May 18, 2011, I saw Fleet Foxes perform in the beautifully underrated and underused United Palace Theater in Washington Heights, New York City. I must admit that while the voyage so far uptown was new to me, the venue could not have been more perfect for the show. A giant, totally seated old theater was the perfect environment to showcase the main things I love about the Fleet Foxes’ sound: harmonies that might make Simon and Garfunkel jealous, lead singer Robin Pecknold’s angelic voice and the beautifully unpredictable instrumental arrangements that build layer upon layer until reaching euphoric heights only to cascade into true beauty. Can you tell Fleet Foxes have been one of my favorite bands since 2008?

The Cave Singers performed a wonderful opening set; during their performance, I easily understood why the Fleet Foxes chose them as tour mates. When the Foxes came on, it took them about three songs into their set comprised of each of my favorites off their 2008 masterpiece Fleet Foxes and new songs from their May 2011 release Helplessness Blues to really understand how to use the space. At first, the bass was much too powerful and there seemed to be some pedal issues, as the first three songs came across more as a wall of sound instead of in the cascading arrangements I mentioned earlier. Once that was figured out, though, the show was flawless.

The only things I’ve ever read about Robin Pecknold and the rest of his Seattle-based crew mention that the band are notorious perfectionists, and this was entirely true in this show. Pecknold was so hard on himself to get everything absolutely perfect that he obliged strange fan requests like “take off your hat!” (but drew the line on the following request for his pants) only to shortly thereafter claim that performing without the hat disrupted a note in one of the songs. A British guy in the audience shouted something like “It was perfect!” and the whole crowd cheered in support, but the praise visibly made him awkward.

The band worked through that, though, to deliver an absolutely technically perfect and somehow also refreshing performance. What was most amazing to me were the bands’ renditions of their more acoustic songs like “Cascades” and “Blue Spotted Tail”. These are the tracks without the crazy arrangements that I typically reluctantly listen to so I can get to the bigger songs on the albums. But, in the space and in their live glory, I quickly saw how equally important these songs in the FF repertoire.  Pecknold led the encore with the quiet “Oliver James” , which blew my mind in the best way possible. Other highlights included the stellar renditions of songs off the new album like “Grown Ocean”, “Sim Sala Bim” and “The Shrine/An Argument”.

My personal favorite part of the show was a triptych of three of my favorite songs off Fleet Foxes towards the end of the show.  The succession of “Tiger Peasant Mountain Song”, “White Winter Hymnal” and “Ragged Wood” was single-handedly the best birthday present I’ve ever gotten. These particular songs remind me of some of the fondest moments of my life, as Fleet Foxes has often been my chosen soundtrack every time I’ve boarded a long bus, plane or train ride in the past three years.

The other best part of the show, though, was the final song, title track of the new album Helplessness Blues.“Helplessness Blues” captures something so universal about the point of life I am in and I think most twenty-somethings can also understand: you want to be a part of something beautiful and bigger than yourself but you have a hard time always knowing exactly what that means. The song makes a comment about our world and the listlessness that comes with “growing up” in a way that most other art hasn’t managed to do.

I was in literal and figurative disbelief when the lights came on at the end of the show. I think living in New York has made me more impatient than ever before; I constantly check my watch even at the best of times – but there I was, pupils readjusting, frozen like a deer in headlights after being on the edge of my seat for an hour and a half. That feeling of being truly inspired is something I don’t often get at shows anymore. And you guys especially know how much I love music.

It was well worth the trek uptown and the unfamiliarity with the place to see these geniuses of our generation perform at their best.