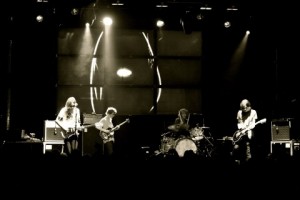 I know that in Australia, self-defined psychedelic hypno-groove rockers Tame Impala are a pretty big deal. I am more than certain that lead vocalist Kevin Parker, drummer Jay Watson, guitarist and synth -player Dominic Simper and live bassist Nick Allbrook are each legitimate rock stars, although their youthful appearances don’t particularly match the kind of brilliantly revamped and improved 70s-era music they create. Despite this, and the fact that most of my best friends in the U.S. have talked to me about the band, I thought I was still in on some sort of secret when I decided to go to their April 25, 2011 show at New York City’s Webster Hall.

Tame Impala doesn’t share the same the kind of mainstream recognition here that similar bands and labelmates Cut Copy and the Yeah Yeah Yeahs or even contemporaries like The Black Keys have.  When I told most people I was going to see Tame Impala, they immediately asked me “who?”. But maybe that’s a sign that I need to reevaluate who I talk to on a daily basis.

The show was indeed sold out, but I figured that was because of the (incredible!) $20 ticket price and general hipster desire to be in on all the coolest ins. By the time I got to the show, I missed the first opener, psychedelic indie rockers Yawn. I did, however, make it in time for psychedelic shoegazers Yuck. I was pleasantly surprised by Yuck’s set, primarily because of their band members. The brilliantly afro-ed drummer’s appearance and style made him the whiter version of one of my favorite people on Earth, ?uestlove of the Roots, while the lead singer had the exact same posture and mannerisms as Jesse Eisenberg. Their music was also pretty good, although you could sense that the crowd was getting bored by the shoegaze. You win some, you lose some.

When Tame Impala took the stage, I saw four young guys I wouldn’t have known if I bumped into on the street transform into the psychedelic rock gods we all know them to be. Tame Impala played a 70-minute long sonic journey that would’ve made Led Zeppelin jealous, encompassing most of the band’s 2010 masterpiece Innerspeaker with some covers and instrumental jams sprinkled throughout.

The set started with “Why Don’t You Make Up Your Mind?”, one of the most melodically defining songs from Innerspeaker. As soon as I really started getting into Tame Impala this summer, I was curious to see them live because their catalogue is filled with brilliantly polished songs whose production variations, quick tempo changes and complex instrumental arrangements might be hard to replicate outside the studio. While it did take the band this first song to really get into their groove, their clear musicianship shined through, clear as day. Almost instantaneously, Tame Impala became a freight train of perfect psychedelic rock music that I never wanted to end.

The band powered through each of my favorites off Innerspeaker, including “It Is Not Meant to Be”, “Alter Ego”, “Expectation” and “Desire Be, Desire Go” in that exact order! After the first part of the set, the boys did what they do best: broke up the momentum and shifted gears to blow the audience’s mind in an entirely different way. This next part of the set started with a long instrumental jam called “Silly”, which is directly followed by a flawlessly tripped out cover of Massive Attack’s “Angel”, one of the most instrumentally interesting songs to come out of the psychedelic/digital/rock hybrid genre as of late. As a legitimate treat for the many die-hard fans, homegrown and exported, Tame Impala ended the set with a medley of “Skeleton Tiger” and “Half Full Glass of Wine” off 2008’s Tame Impala EP.

I was actually saddened by the fact that Tame Impala decided not to do an encore, even though that medley was probably what it would have been. The crowd definitely would’ve appreciated any extra time with our rock gods, but at the end of the day, it was a phenomenal performance. The next time the band comes to New York, Tame Impala will sell out stadiums faster than you can say “psychedelic hypno-groove melodic rock music”.