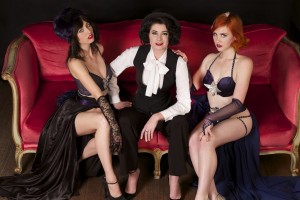 As a bit of a burlesque beginner, I attended The Butterfly Club on Friday the 29th of May to catch Miss Adelaide Everheart’s Early Burly Burlesque variety show. After a dazzling showcase of comedy, tease, and the most magical, well fitted g-strings from three very talented performers, I sat down with Miss Adelaide Everheart herself over a crisp apple cider to discuss burlesque, its history, its future and its feminism.

What is it about burlesque theatre that makes it so accessible to women?

Burlesque reclaims older fashions, while also celebrating women’s bodies as they are. In tonights performance we had two women who were bigger than dancers you would see on a strip club stage, but they were just as beautiful. That really connects with a female audience because they feel more confident to be glamorous, even if they don’t fit the stereotype of what society says is beautiful.

So women can connect to burlesque because they can see themselves in the performance?

Yes! And its not for men per se, it’s for the audience, an audience that is not exclusively men, an audience that is full of women. Women make up the majority of most burlesque audiences. They are the ones who get really into it because it’s about sharing empowerment and being a team and taking back sexuality for ourselves rather than for men.

That’s a very specific time period. Why do you think that period continues to appeal to a modern audience?

There’s that old world glamour thing, the older styles are very romantic. I also think older styles tend to be more flattering for different body shapes. If you look at the 1950s for example, it’s very much cinched in waists, and bigger, fuller skirts, and fuller tops. In those styles you can have fuller hips, you can have broader shoulders and still look glamorous and appealing. It’s a very different look compared to today with denim jeans and low tops. Jeans hang off your hips in a certain way and if you’ve got bigger hips it’s not always flattering.

This seems quite ironic given the Golden era, particularly the 1950s, was quite restrictive for women socially. Do you think burlesque takes the fashion of the era and leaves the restrictions behind?

The Golden Era of burlesque is very specifically American burlesque, striptease. European Burlesque started a lot earlier. Some people believe the play Lysistrata, which was written by Ancient Greek playwrite Aristophanes, was one of the first burlesque performances. The basic story of that show is; the men are at war, the women don’t want them to be at war so the women withhold sex to stop the men warring. Actors walked around with giant fake penises and fake boobs on. It was a satire, it was parodying men only thinking about sex.

And having the control over sex, and women taking back that control?

Yes exactly. The European style is much more ancient, more underground, more fringe, whereas the Golden Era of burlesque was very much in the dance halls with men coming back from the wars and wanting to have light entertainment and escapism and see beautiful women take their clothes off.

European burlesque is about story, parody and satire. The origin of the word ‘burlesque’ is from the Italian word burlesco, which means ‘to laugh at’ or ‘to mock’.

The combination of the European and American streams sees performers adopting glamorous styles while still being politically aware. Performers poke fun at things, make a point and be funny and silly onstage, while also sometimes removing their clothes.

Tonight was very ‘classic’, very Golden Era burlesque. In tonights show you didn’t see much ‘Neo’, which is a type of burlesque heavily influenced by the European stream. Betty Bombshell and Dolores Daiquiri identify very much as classic burlesque artists. In our next show, there will be artists who identify as Neo. I have different line-ups for every month and I try and mix it up. It just so happens tonights performance was very heavy in the classic style.

Even in the Golden Era of burlesque, when strip tease was very popular, the performers had to be creative about their delivery because of censorship laws.

That’s why pasties were invented.

Because it was considered obscene for a woman’s nipple to be shown in public?

It still is! Why do guys get to take their shirts off in hot weather and we don’t?

True! Burlesque from the very beginning seems to have been about pushing the boundaries of what is acceptable. Is that the key thread that unites all of burlesque from then until now?

I noticed the story telling aspect, the parody aspect of burlesque in Elena Gabrielle’s work tonight. Her personas were really funny and irreverent and her costumes were hilarious and sexy but there was also a political message. I loved her bra with the condom fringe! ‘Durex are a girl’s best friend!’

That is one of the main strengths of burlesque, that you can see women dancing and singing and they are going to tell you all about what they think about sexuality.

So, in light of tonight’s homage to the ‘Golden Era’, how do you think burlesque theatre is evolving?

There is a huge community of Neo burlesque performers who use the basics of burlesque – storytelling, parody and sometimes striptease, while also engaging in cultural dialogue.

Neo burlesque is all very modern and Neo performers have got a lot to say about the world around us. There is a burlesque performer in Sydney called Betty Grumble whose work is very political. She’s a wonderful performer to see, she’s really out there with a New York style of burlesque, it’s all about the message, it’s all about being woman and not shaving and taking control of our bodies and taking it back from men’s control.

I don’t have anything against women who decide to be strippers and a lot of women who I have spoken to have said that they find it empowering. The difference is the strip club caters for men who pay for what they want to see, whereas in burlesque, yes we are sexy, but it is our sexuality. We are in control and we are in charge of it.

Some burlesque performers do identify as strippers because they take their clothes off to earn money so they believe they are strippers. I take my clothes off but I don’t believe I am a stripper. I am a performance artist.

It’s a different form of entertainment. To me strippers exchange desire, they exchange a specific experience. You’re exchanging a story. It’s not higher or lower, it’s just a different exchange.

Burlesque embodies such a diverse range of theatre. You’ve got satire, you’ve got costuming, you’ve got dance, song. There are so many things that a burlesque dancer has to be skillful in. Do you have any advice to dancers trying to find their niche within that broad skill set?

Find something that you really love doing. That’s it for any kind of performance. For example, I specialize in ‘Nerdlesque’. I do routines about Star Wars and Star Trek, I do an Indiana Jones routine, I do a Captain America routine. As an MC I am making a caricature of my own personality. It’s just a heightened version of myself.  But as a burlesque performer, people tell me they love my routines because I look like I am having a fucking blast on stage and I am! Because I am doing Star Wars, I am doing Indiana Jones, I am doing my favourite things ever and it translates into the performance. I might not be a good dancer but I’m a funny dancer. I might not be a technically good dancer, but I am funny to watch. I satirise my favourite shows because I truly love them and I understand them inside and out. And the audience connects with that. Basically I just want everybody to come along and have a really good time!

Thank you very much, I had an absolute ball.