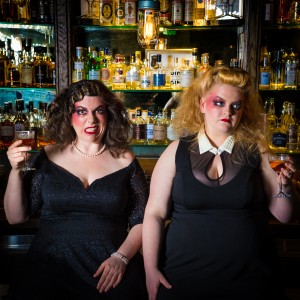 Mother’s Ruin: A Cabaret about Gin is a riotous journey through the history of gin and its associations with the most scandalous of women. Once the scourge of the masses, now drink du jour, gin is an unlikely but surprisingly entertaining topic for a cabaret. Performed by Maeve Marsden and Libby Wood, under the direction of Jeremy Brennan, the show veers from hilarious to poignant, raunchy to vaguely grotesque.

Marsden and Wood are one half of the popular feminist cabaret group Lady Sings It Better. Melbourne audiences are obviously enamoured with the pair; it was a full house on opening night at The Butterfly Club.

Marsden and Wood’s seasoned expertise in taking an audience on a journey was clear the whole night long. From the opening notes, the audience was captivated. They laughed, gasped, and sang along to Billy Joel. At one point, as Marsden performed Martha Wainwright’s ‘Bloody Motherfucking Arsehole’, the audience was utterly silent and still. Musical highlights from the show include malarial burlesque, a fact rap, and the above mentioned singalong.

One of the strengths of the act is the contrast between Marsden’s and Wood’s styles, which is balanced by the perfect pairing of their voices. Wood’s cherubic looks make her deadpan delivery of often crude banter even funnier. Marsden is magnetic, sultry even when tackling themes of sexism and colonialism. Their voices (separate and combined) are exceptional. The pair could sing anything, and I’d be hooked. Brennan provides strong support as pianist and his vocal work holds its own alongside the duo.

Mother’s Ruin sprawls through the ages, a lyrical history lesson intersected with songs from artists like Amy Winehouse, Nina Simone and a duet from Pink and Steven Tyler. Rarely is a drink so gendered as gin, and the gems of patriarchal wisdom that the show reveals are equal parts horrifying and hilarious. Like each performance from Lady Sings It Better, women are front and centre in this piece. Says Marsden: ‘In the end, we’re creating work about things that interest us: feminism, history, gin, music, storytelling.’

Old-school lovers of gin and newcomers alike will be captivated and thoroughly entertained by Mother’s Ruin, which ran at The Butterfly Club in Melbourne as part of the Melbourne Cabaret Festival.