moving backwards into the future: review 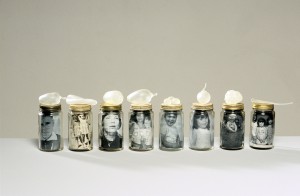 Are you interested in history, politics, and art? Looking for something fun and educational to do on the weekend? The Ian Potter Museum of Art is currently housing a collection dedicated to the creative expression of Aboriginal and Torres Islander people, in an exhibition entitled Moving Backwards into the Future.

As a first-generation white Australian, my exposure to Aboriginal and Torres Strait Islander art has been limited. Shamefully, I am no exception. Privilege should not necessitate ignorance, but it has, and in a climate that continues to erase the identity of indigenous Australians, it is now more pertinent than ever that their voices be amplified.

In part a documentation of an ancient culture, and in part a celebration of current voices and stories, Moving Backwards Into The Future encapsulates the artistic expression of those bound together by a desire to preserve, embolden and honor their identities.

The exhibition takes you room by room through a culturally rich and diverse history. It explores the thriving present and blossoming future of indigenous art, and is full of striking works boasting vibrant bursts of colour, intricate brush strokes and swirling patterns.

The exhibition’s curator, Judith Ryan, has worked extensively within the sphere of Aboriginal and Torres Strait Islander art—having curated 40 indigenous art exhibitions across several decades. She defines indigenous art as ‘great’, encompassing ‘gravitas and beauty and importance’—a visual language which holds the ability to confront, move and educate viewers.

In conversation with her, I learnt that throughout the course of the 19th century, the names of indigenous artists were not recorded at all, and their identities as individuals were completely erased. This insidious erasure of Aboriginal and Torres Strait Island culture is something which continues today. Too often, indigenous art is viewed as an anthropological or historical artefact—useful in telling us about the past but with little relevancy to the present. Otherwise, it is seen as tokenistic—admired and imitated by many, but never really given the respect and consideration it deserves. And often Aboriginal and Torres Strait Islander people are considered to be without an autonomous creative voice at all, merely a reflection of an archived culture.

Moving Backwards Into The Future seeks to challenge all of these assumptions and more. Talking with Judith Ryan, it was also revealed that the exhibition’s 100-odd works (featuring prominent artists such as William Barak, Rover Thomas and Emily Kam KngWarray) were selected out of a pool of more than 4000. This is truly a testament to the fact that all across Australia, the indigenous population are channelling their creativity in the form of political, social and artistic revolution.

It encapsulates a vibrant celebration of a culture which stands proud and unique, and also serves to reflect the way in which it was forced to adapt against the encroachment of white settlement in the latter half of the 19th century. Far from disempowering them, however, the exhibition emphasises the incredible strength, resilience and creativity of a dispossessed and exploited people in their struggle against erasure.

Moving Backwards into the Future is running until 16 August, in conjunction with a series of educational talks on the history and various representations of indigenous art, being held until 10 May.