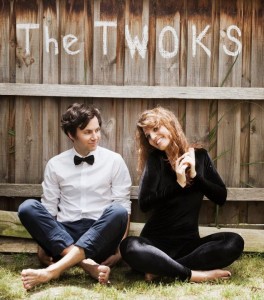 This is a really difficult review to write.

I try to make all my reviews as balanced as possible, irrespective of whether I do or don’t know band members, like or don’t like a particular genre, etc etc. The problem with the Twoks’ performance at the Adelaide Fringe Festival this year, however, is that despite my best efforts to find something to fault them on so as to deliver some kind of objective critique, I have come up with nothing. My objective critique is, I fear, going to sound much like it was written by a fangirl.

Violinist and singer, Xani Kolac, and drummer, Mark Leahy, emerge on stage to what appears to be a near-capacity crowd in the Garden of Unearthly Delights’ Idolize Spiegeltent. The venue is a perfectly whimsical backdrop to the Twoks’ unique D&V (Drums ‘n’ Violin) sound, as well as Kolac’s bright yellow onesie.

Kolac wastes no time showing the impressive array of sounds she can make using but a violin and loop pedals in opening track, ‘Take it Slowly’, tapping a beat on the instrument’s body, finger plucking the strings, and even playing it across her torso like a ukulele. Jimmy Page may have taken a violin bow to a guitar, but Kolac makes abundantly clear just how much can be done with a humble fiddle.

Next they play ‘Sailing Away’, an instrumental journey that whisks and whirls you just as its title suggests, followed by a song inspired by the tragic tale of Leahy abandoned by his then-girlfriend while skiing. Kolac’s charisma in telling/exploiting her bandmate’s experience is met with appreciation and laughter, particularly as she introduces the song’s title: ‘Living isn’t Fun’.

The audience members become more enthused with each tune, but also contently sit back in complete silence when Kolac announces she is going to play an acoustic violin during a Twoks show for the first time. She stands in the centre aisle, and slowly turning in a circle, she plays ‘The Invitation’. She appears just as comfortable daintily dancing and jumping about stage (which I didn’t know could be done whilst playing a violin) as she does playing ballads, and puts equal amounts of warmth and feeling into both. Leahy is solid on drums, and seems quite happy for Kolac to be the star of the show: a role she takes on with heart and soul.

Other highlights included Leahy’s drum solo, providing a lead into an on stage improvisation, aptly demonstrating why Kolac describes Leahy as her musical soulmate; they intently look at one another, and their strength as individual musicians and in this particular duo is a true joy to hear. It also simply wouldn’t do to not mention their unexpected encore; a cover of ‘Sexy Back’ with ‘Bye Bye Bye’ also sandwiched in the song. While they certainly bring their own style and interpretation to the pop anthems, they also happily indulge the crowd’s laughter and surprise.

The Twoks’ recordings are endlessly catchy, but it’s their live performances that give you goosebumps. With their onstage energy and obvious love of music, infectious and/or heartfelt songs, and lovely banter, Kolac and Leahy are a pair that should not be missed.

You can find the Twoks on facebook and their website, where you can keep up to date with their upcoming releases and gigs, including their April residency at the Esplanade Hotel and “Goodbye Daylight Savings” show at the Thornbury Hotel this Friday night, March 30.