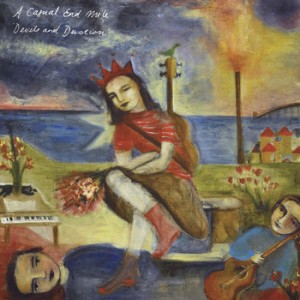 When I was asked to review Devils and Devotion, the recent album by A Casual End Mile (now known as Devotional), I didn’t know what to expect. I had read the November 2011 Lip interview so I felt I had an idea of lead singer Madelaine Lucas’s personality, but I hadn’t really checked out their music too much. A quick Google search led me to a review of the album that said something about the band being Australia’s version of Lykke Li meets The National (neither of which are artists that I’m more than casual fan of), so I was expecting a kind of low key reflective sound.

After listening to the album quite frequently over the past two weeks, I certainly see those influences. However, Devils and Devotion is also more than that. While Madelaine Lucas has a hauntingly pleasant voice similar to Lykke Li’s and the honest lyrics about love on the album somewhat recall those of The National, the originality here comes from the mastering and vocal production. The mild distortion effects on Lucas’s voice, kind of simple songwriting and direct approach to backing instrumentals reminds me of early Cat Power.

A lot of Devils and Devotion sounds the same, but that makes this album the perfect canvas for some introspective time spent at home, your favorite café or a bar or restaurant. I know that may sound strange, but Devils and Devotion is the kind of modern “easy listening” music that fits just as well on a teen television show as it does when you’re alone in your room working on something. It’s winter here in New York, so that means a lot of time spent inside, and whether I’ve listened to the album at work or at home, Devils and Devotion makes a great soundtrack

Most of the songs are standard acoustic folk jams, but there are a couple that stand out. “Winter Skin” and “The Real Thing” have added instrumental elements and faster tempos compared to the rest of the album. I especially like the harmonica on “The Real Thing” because it adds a new level of complexity to that “at home” feel. The quieter songs on Devils and Devotion are just as powerful , though. The piano on “Hell and High Water”, the last song on the album, combined with Lucas’s voice and honest lyrics about love stay with you long after the album is over.

I look forward to hearing what A Casual End Mile/Devotional creates next!