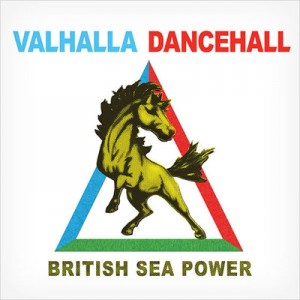 Valhalla Dancehall is the fourth album to come from English band British Sea Power. Knowing very little about the band, I didn’t know what to expect from the five-piece rock group.

The title of the album alludes to Viking Heaven found in Scandinavian Mythology as well as Jamaican discos. The title acts as a litmus test for the subject matter of the album, referring a wide array of themes, while utilising abstract metaphors continuously. Highly political undertones address capitalism and materialism, as well as permeating the album with a number of obscure references, such as to primates and astronomy. Listening to the album at first instance, it gave me the impression my general knowledge was that of a peanut (which is not a good feeling).

The album begins with a Cribs-like rock tune in Who’s In Control, personifying the typical English-Indie song. With a highly repetitive chorus and catchy guitar hooks, it is the first in a stream of highly political songs concerned with power and control. We are Sound follows in much the same way, however slows down significantly to introduce the first of the slower songs, taking time to use reverb to blend into the piano driven Georgie Ray.

It is the centre of the album, however where the strength lies. Mongk II indicates a slight departure from formula which British Sea Power used to introduce the album. Animal themes are referred to throughout the song, again, alluding to political themes.

Luna is one standout track on the 13 song album which deals with metaphors associated with astronomy. ‘Even the galaxies weep for the suns and the stars they’ll never be’. Notably less distortion is featured, however it seems that with British Sea Power less is more, Luna acting as a much stronger, more unique track than those that opened the album. Vocal layers allows the song to develop of its own accord. Baby also includes a wealth of allusions and metaphors, referring to the Western Front, nitric acid and rhino horns, although I was struggling to stay awake listening to the track in its lulling quality (which seems appropriate considering the song title).

Living is so Easy shows some versatility, with some pedal effects, echoing the soundtracks of black and white gameboys. The lyrics in the beginning almost seem juvenile enough to match the music, until you reach the chorus and notice the political overtones.

After listening to a number of notably quieter songs it is almost jarring to be shocked awake with the (apparently not) psychedelic track Thin Black Sail. Again the album takes you through a rollercoaster of tempos to delve into the epic (11 minute) song Once More Now ,which continues the astronomy theme. ‘You my universe nothing but a curse’.

Although ‘Valhalla Dancehall’ finishes quite strongly, I find that for a band that has had three previous albums (including the Mercury nominated ‘Do You Like Rock Music’), British Seapower, though not bad, were unoriginal and lacking in a definitive style. It is without doubt that the centre of the album saves the LP, making it worthy of maybe one giant-headphone wearing session.