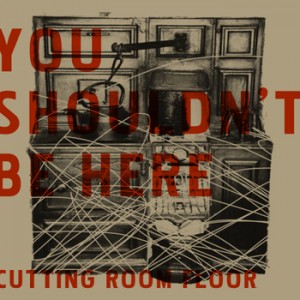 I saw Cutting Room Floor for the first time in a co-op basement in rural Ohio. That night I held hands with three different people, sat in the dark in a dried food cellar thinking sad thoughts, gave a gift, and had a giggly walk into the humid night. I arrived home with three new bruises and had the deep urge to drive fast enough to blur the cornfields into a different colour.

As this three-piece band finishes their summer tour throughout the United States, I think about all of the nights in which their music has made a captivated audience experience the range of hand-holds and sad thoughts and fast drives. I feel annoyed at all the obligations that keep me from following their tour and music, which would be nights worth chasing and living again. In purchasing their album, You Shouldn’t Be Here, I now have a pocket-sized punk show, which feeds into a range of emotions and experiences almost as powerful as seeing them live.

Cutting Room Floor is an emerging queer, feminist trio based in northeast Ohio, which plays with influences from punk, pop and folk music. Their newly released album You Shouldn’t Be Here showcases shouting, harmonies, story-time, and words for jumping up and down. It gives us songs to live to – I lived an evening in which I felt all the feelings. It is a naked, mirror singing soundtrack. This album supplies words and stories that validate the screaming feeling in my belly as a survivor and a feminist.

It is raw and loud and makes it clear that “fuck you, i’m not getting out of my sweat pants” (The No No No). It acknowledges the range of emotions, needs, and triggers of the musicians and listeners. Songs Gaslighter and What’s Wrong With Us feel the most hard-hitting as they cocoon the moments in which our personal realities get tucked away into jokes, such as “it’s all in your head,” and “the things that men do.” The songs hit and the songs hurt, because music so rarely cuts deep into the passion and the right to feel a range of emotions in one night.

Whether you are a survivor or a feminist, have rage settled at your core, or want to blur the cornfields, I recommend this album to anyone looking to feel it fully.