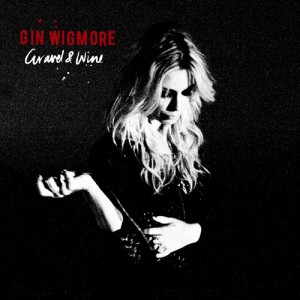 Virginia “Gin” Wigmore, Queen of the Wild Frontier. Record number two from this New Zealand native, Gravel & Wine, has already topped the album charts in her homeland. It’s an album full of unique energy; distinctive in the sense that it’s rare for an album to exude such excitable danger alongside its pop friendliness. Should this album be rated a fit-for-mass-consumption G, or a racy M? There are arguments for both; the LP is filled with songs that sound undeniably radio-ready, but are also at times lyrically and compositionally menacing.

Upon hearing her vocals for the first time, anyone asking “What the Hell is that?” could be forgiven. And that’s the thing with this woman’s voice – whether you love it or hate it, the question remains legitimate; as an inquiry borne of total admiration, or a rhetorical plea for aural relief. Wigmore has an incredibly strong voice, but its distinctiveness will not be to everyone’s taste (imagine a more soulful Beth Ditto mixed with a wickedly flirtatious Amy Winehouse).

Lead single and album opener ‘Black Sheep’ works perfectly as a primer for what is to follow. The track efficiently condenses many of the album’s most exciting elements into its three minutes; vocals overrunning with attitude sitting high in the mix, a drivingly percussive arrangement and a composition loaded with cacophonous hooks.

The electro-glam of ‘Man Like That’ is also reflective of the album as a whole; musical elements from disparate genres cohering to form a new, wonderfully messy beast – and it works. In this instance, the theatrics of Adam and the Ants and The Rocky Horror Picture Show combine with the layer-upon-layer-of-melody technique so successfully employed by Andrew WK. It’s a wall of calculated noise and mayhem, but one that’s an absolute riot to climb.

With the slightest of nods to Gary Glitter’s glam classic ‘Rock and Roll Part 1’, ‘Kill of the Night’ transports those expressive vocals to a world of latex, heavy mascara and irresistible danger. The track, co-written by Julian Hamilton of The Presets, features brilliant lyrics; “I wanna taste the way that you bleed” is followed later in the song with “I’ll take your heart to kick around as a toy”. It pays not to mess with Gin Wigmore.

Like the one-two punch delivered by many a punk album, Gravel & Wine is mastered to provide the most impact in the shortest amount of time. There is precious little empty air between songs and when they hit, they hit hard. It’s not until track 5, ‘Devil in Me’, that the listener is given a moment to breathe. With less backing instrumentation, Wigmore’s vocals also have a little extra space in which to stretch out. Studio collaborator Butch Walker is also given room to shine on this track; in addition to his driving acoustic and crunchy rhythm guitar which constitute the song’s foundations, he also coaxes some vintage surf rock tones from his instrument. The balance is perfect.

By track 7, ‘Dirty Love’, it becomes clear that much of the LP’s character is shouldered by its backing vocals. Scattered throughout these songs are monosyllabic huh’s and ya’s, presumably supplied by credited backing vocalists Walker and another of Wigmore’s collaborators, Jake Sinclair. These simple additions provide a stylistic colour to many of the compositions, placing them in an era of saloon brothels, gunslinging and bar fights.

Amongst the clamour, there is also the odd moment of simple beauty. On ‘Saturday Smile’ it becomes clear that if one makes the effort to listen beyond the distinctive voice, there is an undeniable musical talent at work. It’s an uncomplicated song, but its stripped back composition (strings, piano and vocals) complements Wigmore’s slightly fractured vocal performance. And those lyrics!  – “I think it’s love that gets us through all our goodbyes / So when we die, think of love”. Heartbreaking.

Album highlight ‘Sweet Hell’ is a playfully sexy mess of a song. A rollicking duet with Walker, flirting at times with mariachi, it was clearly an undeniable joy to put together – you can hear how much fun Wigmore and her collaborators had in its writing and performing.

At 37 minutes and consisting of 11 tracks, Gravel & Wine is over all too quickly, but does leave the listener satisfyingly exhausted. Although it’s a pop record, it’s not an easy ride; the production is sharp and the songs are heavily layered, but it does reward perseverance.

For this LP, Wigmore has cast a wide net from which to draw inspiration. In both sound and presentation, Gravel & Wine calls forth musical elements from decades passed; early-seventies UK glam rock and late seventies new wave and new romanticism are all referenced. And like the musicians of those movements who have enjoyed any degree of longevity, this LP has in abundance an undercurrent of genuine artistic endeavour that demands the material be taken seriously.

Love or hate the vocals, it cannot be denied that they are honest. If Wigmore’s voice cracks (such as on album closer ‘Singin’ My Soul’), she doesn’t care. If a note is missed ever so slightly, well, it just adds character.  Even if you wish it was all an affectation, by the time these songs become familiar you won’t care. In fact, you will be converted.