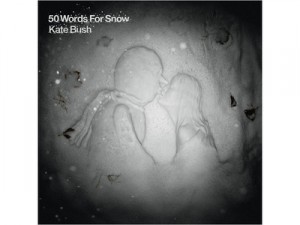 Even if you haven’t heard of Kate Bush, there’s a good chance that your parents are fans (which isn’t necessarily a bad thing). Her first single, ‘wuthering heights’, based on the Bronte book of the same name, was the song which launched her career in 1978. Since then, she’s released five massive albums that have cemented her place in music history.

The first thing you notice about this album is that it is long. Only seven tracks feature on 50 Words for Snow, and yet each song is a lengthy endeavour, creating the type of unique atmospheric record Kate Bush is so famous for. The album is one made by a woman who is in no hurry.

50 Words for Snow was recorded during the English winter, and it shows. It’s a minimalist album. It’s mature too. Opening track, ‘Snowflake’, like most other songs on the LP, is only a piano and Bush’s voice: “I’ll find you, be ready to catch me” she whispers.

‘Lake Tahoe’ begins with choral vocals and is almost eerie. In typical Bush fashion, it takes time to develop. You can be forgiven for thinking it was Christmas in an obscure European country the way the song is structured.

“What kind of spirit is this? Oh what a lonely tryst,” she croons in ‘Misty’. The imagery, like other songs, show an insight into Bush’s inner landscape. At 14 minutes, ‘Misty’ is the longest track on the album. A love affair between Bush and a snowman she vividly describes her disappointment as she sings, “he’s dissolving”.

‘Wildman’ has potential as a song, but a repetitive riff promises to lose listeners. It’s grating and permeates the entire song.

‘Snowed in at Wheeler Street’ begins in a haunting fashion, much like many of the other tracks on the album. Elton John’s voice compliments Bush’s tale of a tumultuous relationship. “I don’t want to lose you… Not again, not again” is repeated over and over, as the song finishes in a cascade of drum beats.

The title track, ’50 Words for Snow’, is a welcome change from the rest of the album. It deviates from the slow ballad piano and introduces itself with percussive tribal drums. While it definitely arouses interest, again, its eccentricity means that it’s interesting, but not connecting with the listener. Stephen Fry features, providing male vocals.

For hardcore fans, Kate Bush’s new album delivers. For those who are new to her music, it requires patience and perseverance. Her imaginary world, and the sheer length of the songs on the track may alienate those who are looking for songs that they’ll immediately connect with.

Kate Bush is from a different era, where concept albums are the norm, and where single tracks were relatively unheard of. The risk with concept albums, like 50 Words for Snow is that there is a danger that all of the songs might begin to sound the same.

What did you think of the album?

50 Words for Snow is out now through Fish People.

One thought on “album review: kate bush, 50 words for snow”