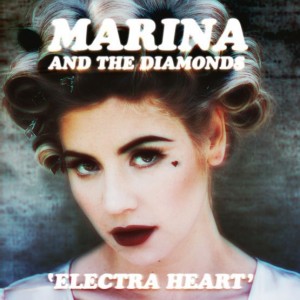 Make the effort to scratch beneath the surface and sometimes you can be pleasantly surprised. And so it is with Electra Heart, the second album from Marina and the Diamonds, the solo musical project of Marina Diamandis. It’s a concept album of sorts, in which Diamandis assumes the titular character in a U.S.A. rife with mindless consumerism and gender-defined vacuousness. Sound familiar?

For Electra Heart, the Welsh native has utilised a number of producers so in-vogue that she may as well be method-acting her album’s character; Dr. Luke (Katy Perry), Greg Kurstin (Lily Allen, Kylie), Rick Nowels (Madonna) and Liam Howe (ex-Sneaker Pimps and with a co-writing credit on Lana Del Rey’s recent Born to Die) give the album a pop artificiality that at times can sound too inorganic, too plastic. The listener can almost hear the multitude of Pro Tools plug-ins exploited in the piecing together of these synth-heavy songs. However, when one realises that all of this is calculated to fit in with the mythos behind the character, it becomes clear that Diamandis is, well, damn clever.

The LP opens with ‘Bubblegum Bitch’. Featuring the lyric “Welcome to the life of Electra Heart”, the track works as the perfect introduction to the album. The record’s die is cast on this song; noisy production, a driving mess of synths and guitars, immense percussive elements and a pop gloss so shiny that not a thing sticks. Ever. It’s easy to fall into the trap of dismissing the track based only on its title, but it must be remembered that in all of these songs, Diamandis is playing her role. Like ‘Bubblegum Bitch’, the album sounds light but is thematically dark. It’s a reflection on the role of women in twenty-tens popular mass culture (at times vacant, vague and empty) and the impact of its contrivances on impressionable minds. It’s a weighty topic conveyed by the record’s blacker-than-black humour. Unfortunately, for those listeners used to paying only perfunctory attention to any album’s deeper themes, at times the delivery of this record’s missive can be a little muddy.

‘Teen Idle’ and ‘The State of Dreaming’ are the closest Diamandis comes on Electra Heart to nailing the difficult mix of subversion, acerbic social commentary and witty role play. With the former containing lyrics such as “I wanna be an idle teen … I wanna drink until I ache / I wanna make a big mistake”, her target in this instance is clear.

‘Lies’ is compositionally one of the more interesting tracks on offer. Stuttering rhythmic elements and vocal effects blend perfectly with its forceful chorus to create a high-energy electro-power-ballad. Its striking synth programming gives the track a sense of urgency, of immediate drama. If only more songs on Electra Heart were this arresting; one gets the feeling that Diamandis is unnecessarily working in electro-pop auto-pilot mode on much of the album.

Diamandis’ vocals, however, shine. They have an operatic quality to them which in any sane world shouldn’t sit comfortably on top of this music. But somehow it works. This is most notable in those passages on the album in which her voice is given room to breathe (see ‘Primadonna’ and ‘Living Dead’).

Second-last track ‘Hypocrates’ sees the album begin its end with style. Employing less stadium-sized musical constituents, the track feels warm and personal compared to the rest of the LP. The perfect chance to catch one’s breath.

Album closer and undeniable highlight, ‘Fear and Loathing’, is a stunning six minutes. A slow-burning song, its subtle percussive programming sits awash in its moving tide of synth pads and piano. A track carried not by its bombasticness but by its emotion. Unlike most others on Electra Heart, it’s a song not burdened by the weight of its intended artificiality.

One wonders just how much enjoyment you’d get from this LP if you weren’t “in” on it. The album does have a lot to say about the world in which we live, it’s just that the message is not always obvious. Additionally, it must be remembered that a successful execution of the concept album includes the proviso that the record be enjoyable as a collection of individual tracks in addition to a larger, enclosed musical document; if there wasn’t such a degree of similarity from track to track then Electra Heart would be an easier listen. This is particularly so in its deluxe configuration (consisting of 16 songs). Thus, for the casual listener, it’s a challenging album.

However, for the listener who chooses to follow Electra Heart‘s biting social commentary (wrapped up as it is in Diamandis’ loose narrative), this is a clever, vibrant and at times strikingly intelligent collection of songs inhabiting an aural space which complements its message almost perfectly.