album review: the luyas, too beautiful to work 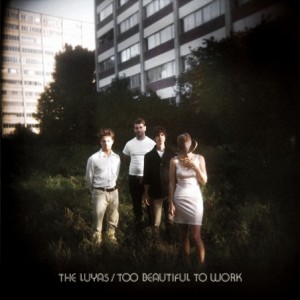 The Luyas have quite the resume. Which is rather impressive considering that Too Beautiful to Work is only the Montreal band’s second album. An appearance at Texas talent scouting music festival, SXSW doesn’t hurt, nor does a tour across North America with Liam Finn, or a stint in Europe with The Dodos.

Asking a friend to step in to help out in an album doesn’t seem so unusual most of the time.  Although it could help to have friends like Owen Pallet (you may have heard his music in final fantasy if you’re a closet video gamer like myself), and assistance from members of Arcade Fire, who recently took out the Grammy for best album this year, beating the likes of Lady Gaga. No mean feat.

Too Beautiful to Work is primarily concerned with musical arrangement. Jessie Stein’s vocals compliment their music (think Lenka meets Stina Nordenstam and Sarah Blasko), but it is clear that precedent is given to developing each song slowly. For much of the album, each track ends in an array of tinkling glass sounds and crashing drums.

‘Too Beautiful to Work‘ opens the record frantically. Rapid keys and rushed vocals fluctuate throughout the track. Drums and distorted sounds keep up this urgency, which immediately introduces the record, only to stop abruptly to lead into ‘Worth Mentioning’.

There is a distinctive hypnotic quality to this song.  Cascading strings and echos lull you into a false sense of security as the track progresses into a frenetic pace. A firebell drill, erratic drumming and minimalistic vocals provide a stark contrast to what was initially a quiet song.

This is no different for ‘Tiny Head‘. The vocals are quite good, only punctuating the song incrementally. The cymbals and percussion again help to give this track its dramatic effect, though by this stage in the album, most of the tracks begin to sound the same.

‘Canary‘, however, demands attention. Though it isn’t remarkably different to other tracks, Jessie’s vocals gently advances to draw you in for more.

The album finishes quite strongly with ‘Seeing Things’. A clean guitar and male vocals compliment the females ones quite nicely. This song seems to be promising, marking a slight departure from earlier songs on the album.

The most surprising thing about the album is that it is relatively short, at just over half an hour. While this is generally the going-rate for albums these days, after listening to the Too Beautiful To Work, it skillfully creates time in the buildup of each track.

At first impressions, it’s easy to imagine this record as a soundtrack to an eerie film. Their ability to slow the tempo down, only to bring the track crashing in an array of sporadic percussions means that this album is maybe better suited for listening late at night. However there is strong danger of this album falling into the ‘background noise’ category. There is an unmistakable formulaic method with which each song appeared to be recorded, and despite the inclusion of a moodswinger (a twelve string electric zither, I’m not quite sure what that is either) each song struggles to define itself as a distinct track. The result is an album founded on periodical singing, turbulent percussion and psychedelic strings as one long song.

One thought on “album review: the luyas, too beautiful to work”