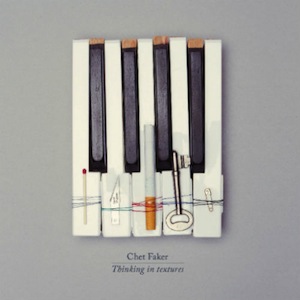 The first question on my mind when I began listening to Chet Faker’s EP, Thinking in Textures, was undoubtedly whether or not it could live up to its own hype.

The Toff in Town added a third show due to unprecedented demand after the first two sold out. Maybe you don’t realise it but you’ve probably heard his cover of Blackstreets’ ‘No Diggity’, which features on the album. This song found its way to number one on Hype Machine and not surprisingly so. The Dr Dre classic becomes a smooth layered electro jam with Chet’s crooning vocals and it’s brilliant.

This genre-bending EP, even at only seven songs, is such a versatile yet cohesive collection that leaves you quietly eager for more. Perhaps it’s part of the hype, serving only a sample of what he can do through this modest release, tantalising the imagination, and leaving fans to wonder what else and what more he will do.

This album is melodic, lyrical, and accessible. It is clear that the album’s greatest influences are the neo-soul r ‘n’ b music that arose in the nineties. But it doesn’t stop there as it becomes infused with electronic and vocal loops and sampling, and Chet’s remarkably accomplished singing.

You can’t deny the subtle hip-hop influenced beat of ‘I’m Into You’ underneath Chet’s hypnotising voice.  While ‘Terms and Conditions’ is undeniably r ‘n’ b in its sound, coming across as a jaded lovers tune. A stand out track is for me is definitely, ‘Chocolate and Cigarettes’. Replete with irregular beats with looped vocals layered sampling, it’s different from the rest of the album as it moves away from the r ‘n’ b territory into what seems to be the indie electro sound that has been pervading the musical landscape lately. From such an enjoyably happy piece of music, it is followed up with ‘Solo Sunrise’, a dark and soulful piece that highlights Chet’s soaring vocal range.

What’s most intriguing about this Ep is the fact that it’s not crammed full of half developed ideas of a band seeking its sound. But rather, what comes through is an artist who seems quite sure of the sound he’s creating and what he wants heard. There is a crystallised vision in the album that is apparent in its title, ‘Thinking in Textures’ – it is a thought out and complex little EP that definitely deserves the attention it has found.

Chet Faker begins his EP launch tour in Melbourne on April 19th. Click here  for all the details!