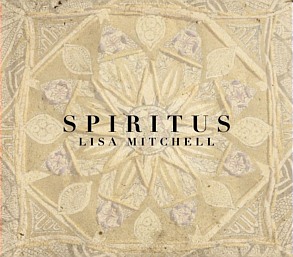 Three years on from a platinum-selling debut album which attained top ten status here in Australia, Lisa Mitchell has returned with her third EP, Spiritus. The five tracks that comprise this release are all very brief – the EP in its entirety drifts by in what feels like moments. But despite its brevity there are differing personalities at play on these songs, from folk to indie pop; always contrasting yet rarely at odds.

The most immediately melodious moment here is the title track and, fittingly, lead single. ‘Spiritus’, with its utterly irresistible piano riff, is so summery and joyful; upon hearing the song it’s almost impossible not to close one’s eyes and simply smile. There is a mood-lifting aspect to it, reminiscent of Jónsi’s blissful recent solo LP,Go. It shares that album’s ability to define a state of mind. The track is a startlingly bubbly opening to the EP, but is far from indicative of what follows.

The organic production on Spiritus gives the listener the sense that every recorded element is authentic. This is most evident on ‘Diamond in the Rough’ (produced and mixed by Todd Dixon) in which the acoustically recorded piano allows the listener to hear glimpses of the recording space’s personality. As with other songs on the EP, the track contains timing errors in its performance, but that is entirely irrelevant; as stated on the CD packaging, these songs reflect spirit, breath and most importantly, life – itself never pitch-perfect nor timed to a click-track.

‘I am a Traveller’, with its imprecisely played acoustic guitar and vocals laid almost entirely bare, furthers the intimacy hinted at on earlier tracks. There is absolutely nothing separating performer from listener; Mitchell may as well be sitting next to me playing my old, beat-up acoustic. There is a remarkable nakedness to this vocal performance; such courage from Mitchell! Like Björk in her most tender of moments (think ‘Cocoon’ from Vespertine), it feels like we’re hearing something meant for our ears only. It’s so very personal.

‘Parade Song’, a track about street carnivals, kittens, face painting and fairy floss, ends the EP in a gloriously affectionate one and a half minutes. Not since Eels’ ‘Daisies of the Galaxy’ has a piece of music so perfectly embodied such nostalgic sentiment. The lyrics, romantic in their innocence, are adorable (“You must take your sweetheart / Hold hands through the gate / Follow him into Neverland / Follow your fate”).

As an EP, a flavour of release naturally constrained artistically by length and purpose, Spiritus is incredibly impressive and almost feels whole (the title track inhabiting a slightly different world to the songs that follow). Having said that, not for one moment will this music cater to everyone. Its jagged edges will be divisive; there is precious little studio shine on these tracks. But it’s the way that most of these recordings are so wonderfully unkempt, no doubt by design, that makes the release as a whole so intimate.

The EP feels like a whispered secret; the listener treated almost like a confidant. Spiritus is a very personal invitation into the emotive, tender and gentle world of Lisa Mitchell.