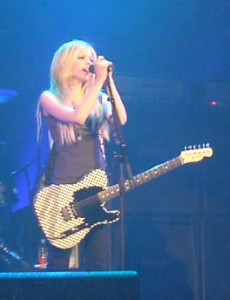 Canadian pop star Avril Lavigne has released a music video for her newest single Hello Kitty, which involves the singer being shadowed by a group of robotic Japanese girls while eating sushi and wearing a lolita cupcake skirt.

The song itself, co-written by Lavigne’s husband and Nickelback front-man Chad Kreuger, boasts playful lyrics such as ‘Let’s play truth or dare now, we can roll around in our underwear, how every silly kitty should be.’

Surprisingly, these woeful lyrics are not the main reason for the song’s downfall.

Lavingne dances around in the video chanting ‘kawaii’ and other Japanese phrases, an awkward attempt at cultural appropriation that has ended up just seeming offensive. Her entourage of Japanese dancers are stony-faced and docile, objectifying the ‘kawaii’ culture and Japanese women alike.

The video has not been received well by the internet community, dubbing it ‘racist’, offensive and frankly quite cringe-worthy.

Hello Kitty depicts Tokyo as a stereotypical, sushi-eating playground of colourful foods and people, a misappropriation of Asian culture that has been used by Western pop culture numerous times.

Quite often pop singers have been accused of racism when using women of colour as props in their performances; Miley Cyrus attempted it in her song We Can’t Stop and who could forget Gwen Stefani’s army of Harajuko women.

What do you think of Lavigne’s new song, Lipsters?
Is the clip racist?
Share your views with us in the comments!