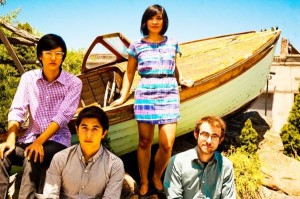 On Tuesday, 15 November 2011, I went to one of my favorite places in my neighborhood to sit down with Alexa Cabellon, the lead singer of Brooklyn’s own Little Anchor for an interview. We talked a lot about Little Anchor’s September 2011 studio release Yellow Lights, Alexa’s musical background, the fact that we live two doors down from each other, how we ironically know some of the same people, what’s next for the band and more.

Brooklyn can be a small world, and Little Anchor is taking it by storm with their catchy folk pop sound. Read below for some of our highlights.

Tell me about your band – the history, how you guys came together, what the significance is of the name Little Anchor.
The people in my band are Kendrick (guitar) and Thomas (bass), and Ian on drums. I met Kendrick and Thomas during our junior year abroad in Prague. We happened to live on the same floor and we also were in the same Czech language class, so we got to know each other. We became really close and after I graduated in 2009 from NYU, I had more time to work on my songwriting and voice. I started recording a couple demos and showed them to Kenny and Thomas and they were really encouraging and said if I ever needed a backing band they’d be happy to do it. At the same time, there was an open room that in my house and they knew Ian through the Jazz Department at NYU, who happened to be looking for a room. Then I found out he was a drummer, so it all worked out! It happened naturally.

Coming to the name Little Anchor took a long time. When I started, it was a solo project, and they became the back-up band. It started to take on more of a band sound and I preferred playing with people rather than solo. So for a while, there was a joke band name “Alexa and the Boyfriends” because they were all in serious relationships at the time, but I started to think about what inspired me and I came to Little Bird, I like the imagery that comes to mind when songwriters reference birds in their lyrics. But Little Bird is a band from Texas. Eventually, Kenny came to the name Little Anchor: something small yet grounded, being the only girl, being powerful, and being someone of a small stature, it seemed to fit. We also liked the idea of working with anchors in design and merchandise.

Was there a particular moment where you realized you wanted to do music, or did you have any early influences?
My mom and sister both play piano. My sister also writes songs with the piano, so being surrounded by music and by women in a sense, was inspiring and made me want to learn. I had a natural knack for the piano, I used to play by ear. When I was 8 my mom decided it was time to take lessons because she realized she couldn’t teach me. I guess there was never a defining moment that made me realize I wanted to play – it’s a lot of things – it was just always there, always something I was interested in and made me want to keep learning.

How do you feel about the internet’s role in promoting your music? Do you see it to move more towards or as something you prefer to move away from?
The internet really helps with us get our music out there, because we’re working jobs and we don’t have a lot of time to tour as much as we’d like. We’ve had a lot of good feedback from people in Amsterdam, surprisingly, and also in London and DC and Philly, and the fact that we can’t tour but there’s still people outside of new York that can listen to us is really awesome. Whatever the new medium is on the internet, I’m willing to embrace it.

What inspired Yellow Lights?
Yellow Lights was named after we had recorded everything and it was mastered. Kendrick, being really good at names, he came up with Yellow Lights – that’s a lyric in the first track of the album, I really liked yellow lights as a theme for the whole album because it means slowing down or being cautious. When I thought about these songs in general, it was all things that had happened. Writing each of the songs, they are all very personal in a way. “Lady Tennessee” is the only one that’s pretty much entirely made up, came from meeting this woman on the subway on the L Train. The 3rd track, “SEA/MD”, is about where I grew up in Maryland as a kid then to Seattle. I am heavily influenced by my surroundings and what I have gone through, even the littlest of experiences are really interesting to build on.

What do you like to do not playing music, or what are your other interests?
Music is a big one, I am pretty knee deep in music with my job and my band. But I also have a pretty big passion for food, if I wasn’t in music I probably would try to be a food writer or food critic. I’d love to start my own restaurant or food truck. The whole band is pretty big foodies. I also happen to do a lot of cycling. I did the 2009 NYC Century bike ride. Then a few months later, I got a text from someone that said they got a postcard about me being on the promotional postcard for the next year’s Century ride. I also got that announcement in the mail and my face was all over it! I got in touch with Transportation Alternative and they said I could get as many postcards as I wanted, so I have a huge stack in my house that I’ve been meaning to send out as Christmas cards.

What is your perspective on being a woman who leads an all-male backing band?
I think in a way it works to our favor. I still think there is a little bit of a bias towards women – there’s just not a lot of women seriously doing music. When I was thinking about my friends in music, most are male. I don’t have that many female friends that do it and do it seriously. I don’t think being a woman has ever held me back.

A song I wrote I wish or played is…
I love the Beatles a lot. That was the first rock band that I really got into. I really like the Beatles song “And Your Bird Can Sing” is my favorite.

What are you into now?
One of my favorite artists right now is St. Vincent. I was bummed that I couldn’t go to her show – it was sold out and no one was selling tickets when I went to the venue the day of the show. I have been listening to her since her first album in 2008. It’s been pretty cool, as a fan, to see her evolve. She has become much more experimental in the past three years. Her most recent album is most fully realized album. She’s an amazing guitar player, and she’s a little underestimated because of that, maybe even because she’s a woman, most people don’t expect it.

How do you define your sound?
It’s kind of all over the place, and what joins Yellow Lights together is the fact that I am singing on every track. I’ve come to the term “folk pop” because our sound starts out pretty acoustic, and can pretty much stand alone that way, but at the same time I try to write catchy or striking melodies for people to hold on to, using the classical background that I have or the jazz background the boys have to make something compelling.

Best advice I ever received was…
It’s kind of corny but people tell you to follow your passion. I’ve always done that and it’s always worked out.

Check out the Little Anchor Bandcamp page to listen to Yellow Lights and learn more about the band!