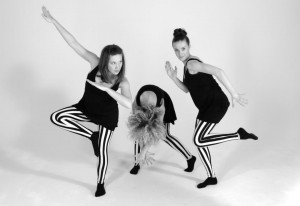 Melbourne based trio Aluka are set to gain more attention for their exciting experimental take on the a capella genre. In between writing catchy songs, creating cool videos, and most recently, popping out babies (of both the musical and human variety), the girls took some time out to answer a few questions.

I’ve been quite a fan of your work over the years. For those unfamiliar with Aluka, please tell us more about who you are.

Well thankyou! We are a Melbourne based band of ladies who enjoy making music, knitting and interpretative dance.

How did the idea of starting an a capella group come about?

We never really intended on starting an a cappella group as such. We just really enjoy each other’s company and found that becoming a band was a great way to justify copious amounts of time [together]. The a cappella bit came about because we played to our strengths, singing, and our weaknesses, i.e. playing instruments.

What does the name ‘Aluka’ mean? How did you come up with it?

We smooshed two words together (Larku and Appaloosa) and got Aluka! After which we were informed that Aluka means ‘to plait or weave’ in Zulu. A happy accident! It could well have meant ‘poo in your ear’, we were lucky.

I find your harmonies and arrangements very interesting. Do you write your songs together? Or is someone the key arranger in the trio?

We all write together! Generally someone has an idea that they bring to the group and then we flesh it out together. This process is equal parts amazingly fun whilst also time consuming and brain squashing, as we use no theory or write anything down.

Who are your musical influences?

I think there’s no use denying that we were all pre pubescent Spice Girls lovers and maybe that explains a lot about how we ended up in a girl band. More recently though, we are really into artists like Caitlin Park and Ainslie Wills, and we love J-Dilla’s beats. Oh! We’re loving the newest Tallest Man On Earth album too. So yes, an eclectic mix.

In the past, you have featured as Clare Bowditch’s ‘Lady Garden’ and you also went on tour with Lisa Mitchell on her Heavenly Sounds tour. Do you have any other collaborations coming up? Or is the primary focus for now on the Aluka project?

Hmmm. We’re pretty stuck in Aluka land at the moment but there are a few on the cards. As they are unconfirmed though, we may look a little silly if we tell you and they don’t come to be.

Keep My Cool is the first single off your debut album, due to be released in early 2013. Are there any details about the album that you can reveal now?

Yes! The album will be out in early April!!!! We are so excited! We have been traipsing around Victoria recording each song in an unconventional space including tram depots, swimming pools and World War II bunkers. As you can imagine, each song has a special quality and sound that makes for very interesting listening. We counteracted this ‘interesting listening’ with some good old-fashioned pop song writing. With the help of our amazing producer Nick ‘the brains’ Huggins, I think we’ve got the balance right!

Is there anything else that we look forward to from you in the near future?

2)   Rachael gives birth to a real baby in Feb!

Aluka’s debut album ‘SPACE’ is due for release on 5 April 2013. You can get more info on the band via their Unearthed page. Check out the video for their single ‘Keep My Cool’ below!