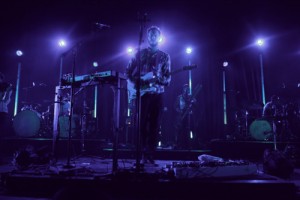 On August 10, 2011, I headed to Prospect Park (my favorite Brooklyn venue) for a sold out Bon Iver show. This band, led by the sensitive “bear hipster” falsetto-voiced Justin Vernon, has been one of my favorites for a couple years now. I was drawn in by the overall intensity of 2007’s For Emma, Forever Ago, including the story behind it, in which Justin got lonely one winter and holed up in his father’s cabin in Wisconsin to record the entire album.

I first saw Bon Iver at the Rialto Theatre in Tucson, Arizona with  200 or so people. This was in September 2009. Bon Iver had recently had some internet exposure thanks to those beautiful La Blogotheque videos of the band playing intimate shows in Paris, but was still generally unknown. A friend had introduced me to the band only a few months before that show, so my excitement for and appreciation of masterpiece album For Emma, Forever Ago was still fresh. At that show in Tucson, I really connected with the way Justin Vernon and crew drew the crowd in so close – the irresistible intimacy was the same at the live show as it appears in the videos. We all sung “what might have been lost” in the appropriate parts of “The Wolves (Act I and II)” and it just felt right to be there, experiencing the show like that. Folk music tends to do that to me.

Enter almost two years later: collaborations with Kanye West, successful solo careers and new masterpiece album, Bon Iver, and the band is now all but mainstream. The new album is remarkably different from previous material. The added synths and larger backing band on Bon Iver, Bon Iver makes this album bigger than anything from the earlier years. I thought that the new songs, the larger critical reception and the hoards of hipster fans would make me hate the new Bon Iver. Or, a little less dramatically, the show at Prospect Park was Bon Iver’s largest to date, so I was curious to see how the intimacy would translate to thousands of people.

Bon Iver’s performance somehow only excelled in the larger space. The band “totally krushed it”, as one of my friends later texted me that night. I am not being ironic. Somewhere between new songs like “Perth” and “Calgary” and “Holcene”, Justin’s totally open and honest dialogue with the crowd expressing the band’s happiness with the large show, and amped up renditions of older classics like “Re: Stacks”, “Creature Fear” and “Blood Bank”, I became completely happy. I didn’t even notice that Bon Iver neglected to play “For Emma” or “The Wolves”.

The two encores corrected these things, though. The first encore was an amazing mini-set that made me drop any resentment I had towards Bon Iver getting huge. This began with “Skinny Love”, which blew my mind in such a large space, followed by an awesome cover of Björk’s “Who Is It” that the band has been doing the whole tour, and ended perfectly with all the fans joining in for the crowd-sing part of “The Wolves”. The second encore was the icing on the cake, though, because Bon Iver finally played personal favorite “For Emma”. It was clear to me in that moment that the larger audience and beefed up songs has always been what Bon Iver envisioned for its live shows. The band now just has the due appreciation and recognition to achieve that. I felt strangely maternal and even more strangely in love. I couldn’t have asked for a better way to spend my Wednesday night.