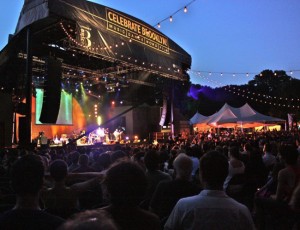 Back in November, I saw Sufjan Stevens for the first time, when he was on tour supporting his 2010 radically electronic masterpiece The Age of Adz. The show was in a seated New York City theatre, which strangely confined the audience for the mostly exuberant celebration of life and art and space and everything good that is that album. Except for the epic, 25-minute long “Impossible Soul”, it felt too weird to get up and dance in a venue that seemed more suited for a Broadway play rather than the merging of indie rock, dance and folk that Sufjan and crew provided with the show.

Nonetheless, I was blown away then by the theatrics of that show; the visual aids, the neon and the musicianship of standout tracks from the album including “Get Real, Get Right”, “Too Much”, “The Age of Adz” and “Futile Devices”.

When my friend asked me about seeing Sufjan again on August 2, 2011 at Brooklyn’s celebrated Prospect Park for her birthday, I immediately said yes. I knew that seeing the same performance in an outdoor venue would deliver the extra oomph that November’s show had lacked for me.

Then two weeks ago I sprained my ankle so severely that I now have one of those walking boots.

That accident was a major bummer for a lot of reasons, but it wasn’t until I was sitting in the park on Tuesday while everyone else was standing up and dancing around to the joyous occasion I knew too well that I realised just how much of a “fear of missing out” (FOMO, as my sister likes to call it) I have.

Not surprisingly, I am one of those people who shamelessly badgers my way to the front of every show I go to see. I figure everyone paid the same price to see the band, so getting to the front is a level playing field that seasoned concert-goers such as myself are used to easily manipulating. This case especially holds true for huge outdoor concerts like the August 2 show.

So you can imagine my horror and disappointment at being confined. For the whole first hour of my time there, I was pretty bummed out about the whole thing and as each new person stood up around me to better witness the magic of Sufjan Stevens, I dug deeper and deeper into a hole of self-pity.

Then my friend and my older sister sat down next to me, not saying anything. They knew they didn’t have to – I was actually encouraging them, the birthday girl especially, to push their way up to the front because it is important to be where the major visuals are during the theatrical light spectacles of Sufjan’s performance – but it was nice that they didn’t listen to me. I decided right then and there to make the situation work for me instead of the other way around; got used to peeking through the spaces between flannel shirts and ripped jean shorts and found a unique way to enjoy the concert.

As Sufjan Stevens, his insanely large background band and the dancers proceeded through almost the exact same setlist as the November 2010 show, I realized how much they had grown in performing the beautiful burden that is The Age of Adz. There’s so many instruments, so many different speeds and moods on that album…it’s a big job to perform it flawlessly, especially outside.

At the time of the indoor show, I had figured that the sense of disorganization in the set was probably due to its spatial components. I hadn’t even really considered that the lack of control was from the band’s newness in performing the material rather. In seeing the show again, I was thrilled to discover how Sufjan Stevens was playing his role as introspective indie rock star in a new way, under the additional title of orchestra director.

The show was, needless to say, amazing. Sufjan made just enough comments about biking through Prospect Park and living in Brooklyn for the past ten years that it brought nostalgic tears of pride to even the newest transplants, and the projector visuals and multiple screens were amped up to match. The sound was unbelievable – I am not sure if it was because my vantage point was so low or because I was really paying attention, but the way the sound was projected throughout the Park made me develop a passion for sound engineering that so far, only LCD Soundsystem’s final performance has rivaled.

The best part of the show was the final song to the set, the previously mentioned epic “Impossible Soul”. When Sufjan and crew hit the second-to-last change in the song – you know where the beat kind of explodes on itself and you hear pure rapture for a few minutes – and the beach balls were flung over the fence from the back to begin their trajectories upward, I knew that paying that steep ticket price again was well worth it, even from the ground.