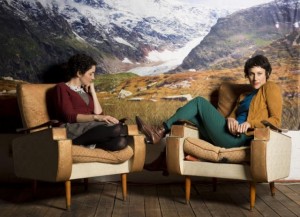 Enigmatic. Mysterious. At times exuding such warmth that the listener cannot help but melt. Haunting. Evocative. Beautiful. Brighter Later’s The Wolves is all of these things. Casual listeners beware, this record demands attention.

The Wolves is the debut LP from the Melbourne-based collective (primarily the musical outlet of writer, radio producer and songwriter Jaye Kranz). Recorded by Kranz and bandmate / production partner Virginia Bott in an old church in Melbourne’s west, the space’s acoustics were employed to remarkable effect; lashings of delicious natural reverb permeate these tracks. “Natural” is a concise adjective – it’s an overriding sense of nature that is perhaps the LP’s most alluring quality. The record is warm and embracing, making it the perfect soundtrack to a rainy, frosty Sunday afternoon. There are recurring themes of snow and picturesque wintry vistas throughout the lyrics on The Wolves. At times it even sounds like winter; ‘Another Day’ utilises synth pads to replicate the presence of wind and rain. It feels like a seasonal offering; no doubt deliberate on the part of Kranz, but it works.
Within The Wolves‘ clearly defined musical boundaries (the pattern is set by the end of track two), there are disparate elements working from song to song. But the distinctive vocal delivery of Jaye Kranz (imagine a cross between the frail beauty of Lisa Mitchell and a more bluesy, tender Alison Goldfrapp) constitutes the vital thread holding together the whole package. However, the pedestrian nature of the record, highlighted by its repetition of tempo and mood, can lull those listeners unused to giving records anything more than a perfunctory degree of attention into a sense of gentle, comfortable sleepiness. Wise to the danger, Kranz limits the LP’s length to a modest 10 tracks. For those prepared to pay attention, The Wolves is unlikely to outstay its welcome.

Kranz has in spades a knack for writing a killer chorus (‘Slow Roller’ and ‘Magnolia’ in particular – the former’s chorus featuring a crescendo of keyboards, bass, multi-tracked vocals, slide guitar and rhythm guitar). More remarkable however, is her ability to meld the sheer number of instruments at her disposal into a compound that works. There is a remarkably varied and staggering number of sounds employed across these tracks (‘The Woods’ for example features vocals, guitars, a drum machine, keyboards, synths, bass, drums, picnic forks, claps and layers of backing vocals). To attain such a balanced mix is testament to Kranz’s studio production and engineering abilities, and Andy Stewart’s (Gotye) mixing skills. This is even more remarkable given that at the outset of recording The Wolves, Kranz was a production novice.

‘Satellite’ sits atop its bed of subtle synths, guitar and keyboards, while first single ‘The Woods’ channels the more folkie and playful moments of The Sleepy Jackson’s output. Lighter-than-air ‘Another Day’ floats on a cloud of reverb and a gorgeous marrying of a Rhodes piano and synths, and LP highlight ‘All the Great Lakes’ is both picturesque and melancholic. A mournful yet pretty pop song; like the rest of the album it’s an exercise in restraint – with so many instruments vying for the listener’s attention, it’s what’s left out that makes the track so striking. Like this song, the LP is a world away from over-performed.

Brighter Later will launch The Wolves with a gig at Melbourne’s Northcote Social Club on Sunday, March 24. The album’s second single ‘Come and Go’ is available now on iTunes and Bandcamp.